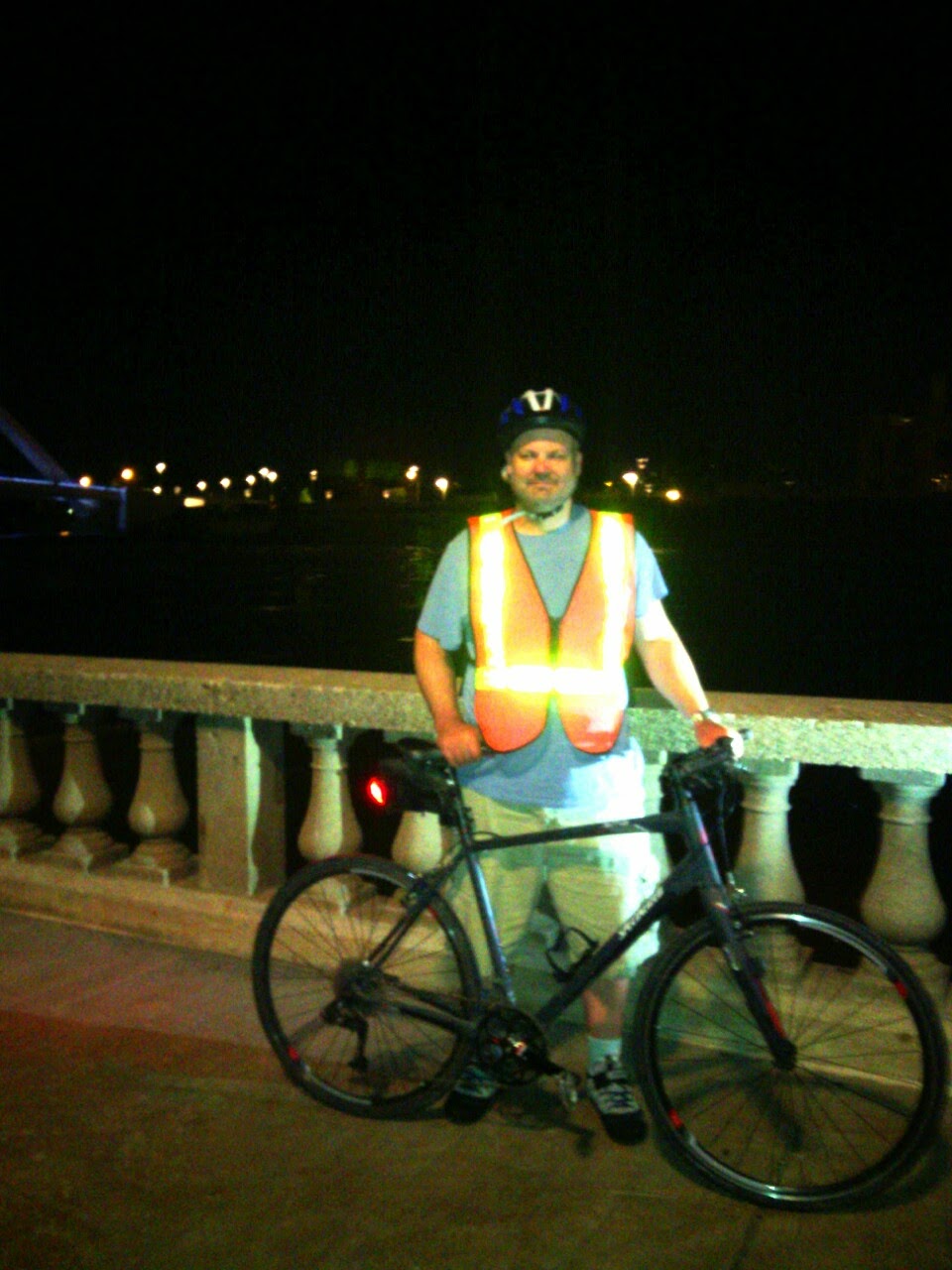 I get these moments in life when I get bombarded with reunions with old friends of mine.  Out of the blue they start calling or contacting at once I almost think it is a sign to get together because I will be leaving this life soon.  Maybe it is a seasonal thing so I am blogging this for future study.  Maybe because Ragbrai is in the air.

Started with a text form a long lost biking friend whom I think never joined the internet world.  He asked if I was doing the big ride, Ragbrai,  Then a phone call from an out of state friend about a late summer ride.  Finally Anders contacted me about riding on Saturday.

Anders and myself do not get out and ride very much anymore.  Both of us are working family men and syncing our worlds together is difficult.  When we used to ride all the time we were toxic to each other so I appreciate the fact that we can now ride together a prove that this toxicity is over.  We have gone up, grown immune.  Sure it was late last night but we disproved our critics. 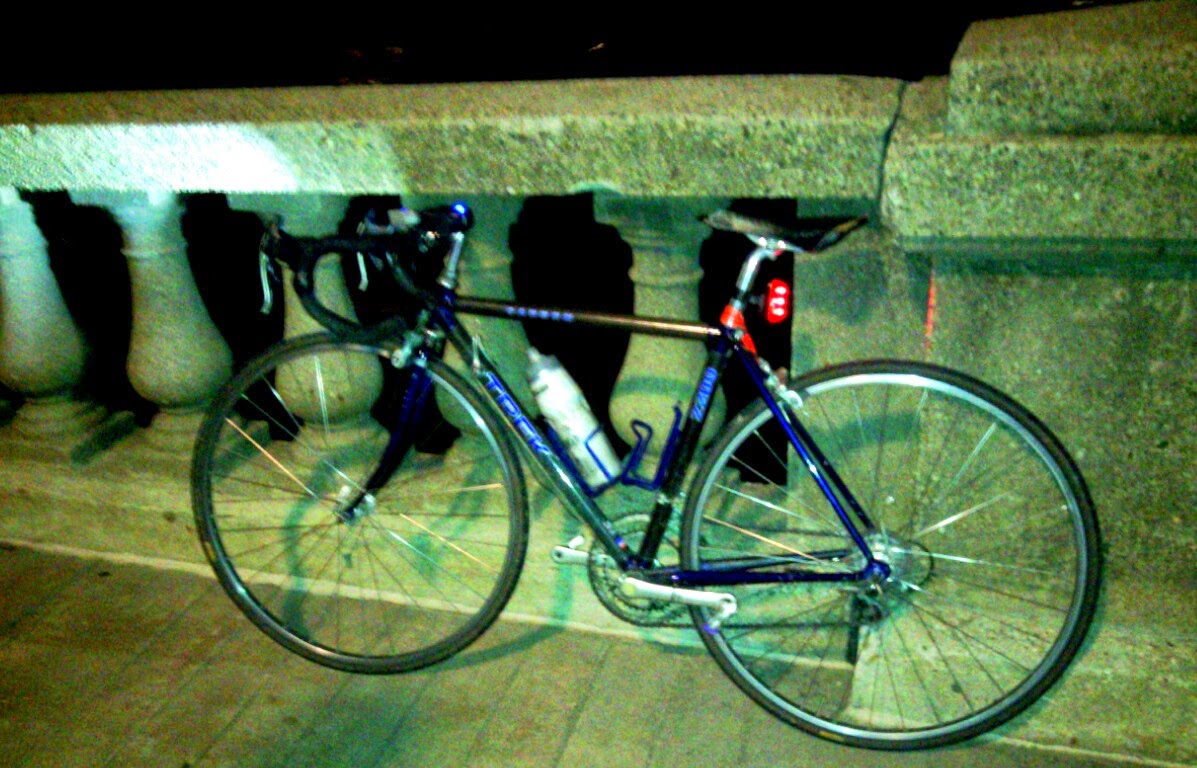 And what reunion would be complete without getting a certain bicycle running for such occasion?  I beloved Trek 2200 became road worthy when I used this ride as an excuse to fix the flat tire it suffered during 2013's commuter season back in October of 2013.  I tried to fix it back then but could not get the tire back on.  I blamed the cold weather.  Wait until summer to finish fixing the flat.  This bike has had hundreds, maybe thousands of miles riding with Anders.  It is a shame that some thief stole his Cannondale, the bike he shared 99% of those miles with.

The plan was to ride at night to House of Bricks to see Jason Boten's band, Nest of Snakes.  Another friend I have not seen in quite some time.  But we ended up exploring the trail system.  Anders lives west of downtown and does not get many opportunities to frequent the trail system east.  We met on the Bill Riley Trail and hung a left at the bridge and rode past Mullets and onto the Des Moines River Trail.  New to him and possessing some scenic vistas of the DSM skyline. 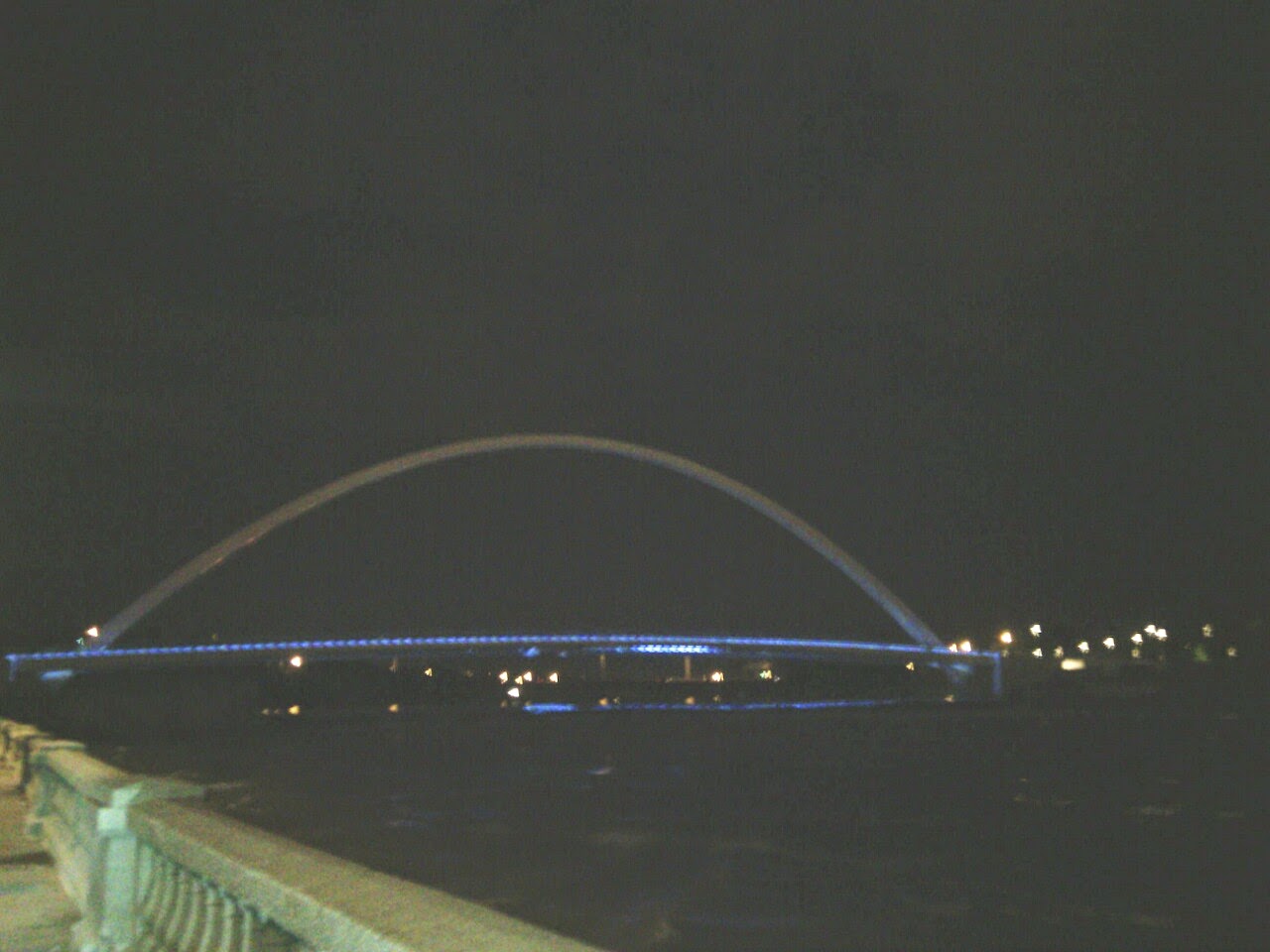 Returning to Mullets we headed up the Principal Riverwalk and crossed the Women of Achieve bridge and stopped at the Bob Ray Japanese structure.  After that it was time to hit the East Village.  We grabbed a set of Tacos from Tacopocalypse and then chatted with Bob Moural, Brad and Cali, Laura and Will in front of the Locust Tap and then on the red bridge.

Finally we worked ourselves home parting ways in Water Works on the bridge.  Hopefully another ride soon.  It's perfect at night in the summer.  Warm but not oppressive like during the day.  Less crowded too.

Today I get to visit another friend for his birthday.  Just making the rounds! 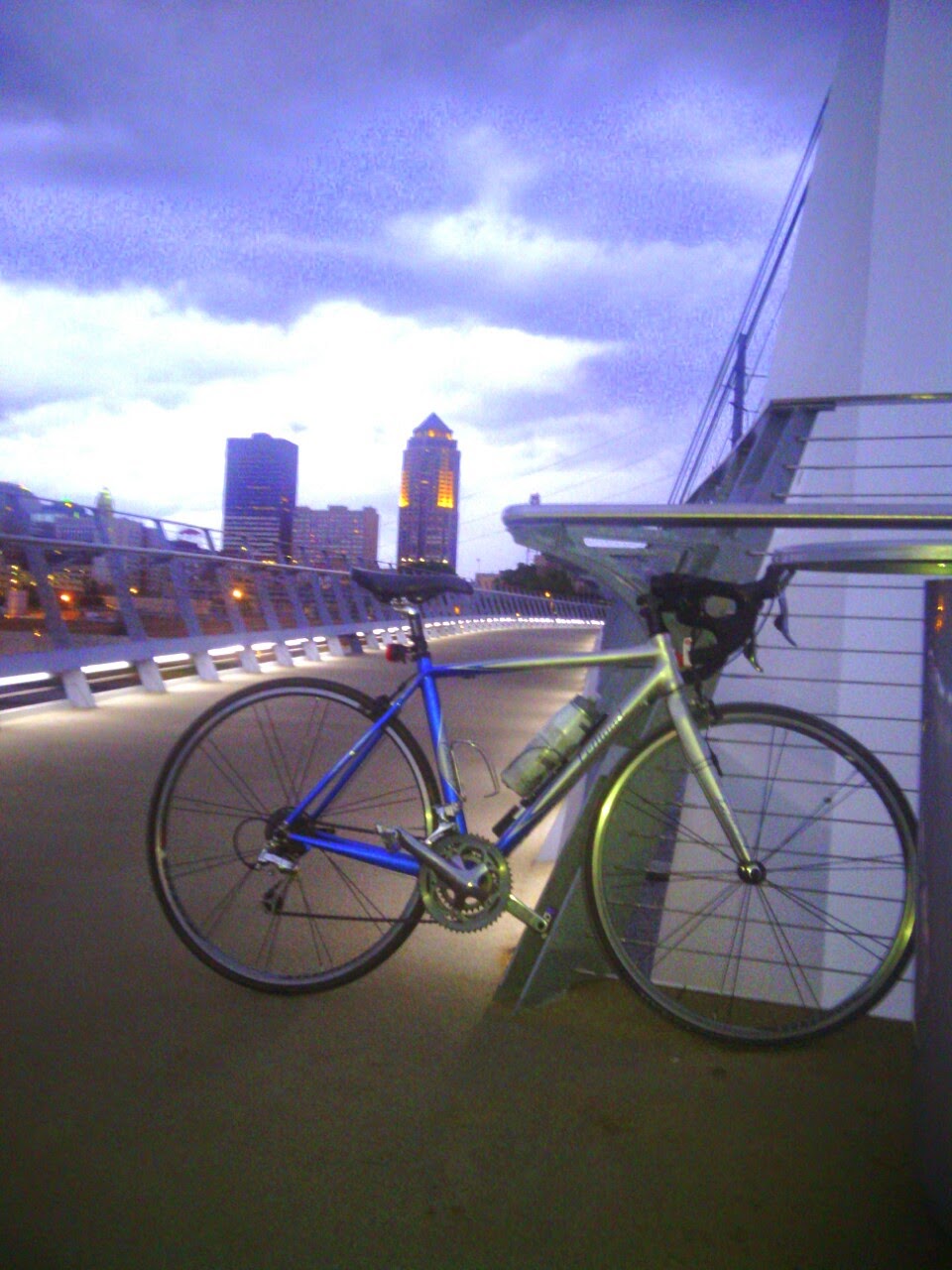 The last weekend before RASDAK and we decide to take it easy.  No long rides, no hills to slay.  A mere ride to a friend's house to pick up some tires and another ride to another friend's house to attend a BBQ and beer tasting.  Relaxing.  Fun.  Can only sharpen a pencil so far until it is totally useless.  Probably should eat some carbs.  If only the weather would cooperate.

Colin was heading our direction at about the 2.5 mile mark.  We stopped and chatted and he shared some New Belgian with us.  Good to have friends.  Been a few weeks since we had seen him  I think he is losing weight with all the biking he has been doing this year.  We parted ways and chased the rain again.

Not more than a mile after parting ways with Colin, we came across Joe and Donnie making their way back from the High Trestle.  Just a brief chat as Joe needed to get home to celebrate his anniversary with his wife.  The four of us plus a few others will be riding across South Dakota in the following week.

By the time we hit Water Works Park the water was off and the sun was out.  Humidity and intense sunlight.  We stopped at the bridge and talked to friendlies.  Walter gave me a beer and Brad gave mary a mango flavored jello shot.  Tasha wanted to go to Beaverdale for something different but Ingersoll would be their next stop.  I don't think they got much further.  Another 3,5 miles and we were home.  Drop the tires off and took  showers.  Had to clean up for Jerry's BBQ in West Des Moines.

The Sun was out but another cell moved in.  Upon returning to Water Works we stopped under a tree and watched the rain fall in the sunlight.  When it stopped we chased the rain all the way to West Des Moines.  Literally a minute behind it at all times.

Jerry lives near the WDM/Waukee border.  It's a bit confusing.  Here one municipality numbers their streets the same as Des Moines and Urbandale and Clive.  WDM has their own system.  We took the Greenbelt to Country Club and then headed south to University.  Looked good on the map.  But in reality it is a busy road on a Saturday evening.  Had to stop once to consult Google Maps.  The Waukee sign added doubts to my navigation.  But we were on the right course.  One side of the road was labeled in Waukee, the left side WDM.  Numbers increasing when we were looking for decreasing.  Eventually we found the turn and a familiar landmark, the Casey's.

Jerry had a nice spread of food and beverages.  I had a few glasses of his homebrew.  One was a creamy ale, the other named "Spotted Cow" a lager IIRC.  Both were delicious.  An long time school buddy from Ottumwa, John, was there with his wife.  They do not get out very often due of a child with medical issues so it was a pleasure to see them again.  We ate, drank and watched the clouds and radar and stayed until dark and left sober and headed to the Raccoon River Valley Trail which is the way we should have gone.  Set the lights to "epilepsy" flash mode and safely reached the trail.

I ride the Clive Greenbelt almost every day.  Rarely at night and rarely after rain.  Even more rare, on tandem at dark on a wet surface.  These conditions made the ride interesting.  More bike to push through the curves hoping the tires would not hydroplane or hit slick mud.  Also hoped not to hit and bikes, pedestrians or deer.  Success.  After reaching the end of that trail we took the walnut Creek trail to Grand ave and detoured to Abelardo's for cheap Mexican food.  I had the #18 which really is too much food.

Back on the trail was almost incident free until we encountered another bike.  We saw the light making its way through the curves and he had to have seen ours.  What we did not see until the last second was the bike without lights behind him.  Kind of a shock,  Expect one bike, get blinded temporarily and then see a face in fear as we illuminated the hidden bike.  Close encounter.  It was almost midnight.  Eventually we got home.  A 62.8 mile day.

Sunday evening we rode to Johnston to have dinner with my mother.  Once there I checked the radar.  Storms heading our way.  we left her place about 730 pm and rode very quickly into a head wind as the sky to the west was black.  It would be close.  We could feel the wind pick up and the temperature drop.  Going to be close or wet.  The sky to the southeast was better and the direction we were going.  Little time to mess around.

We did stop on the Women of Achievement bridge for photos.  I thought of the irony of us chasing the rain on Saturday only to have it chase us the next day.  More like send us on full retreat.  11.5 miles in record time into the wind.  The sprinkles began on the last mile.  But they were a tease.  The last half mile was on the street and a quick glance at my computer made me smile.  I was hauling ass!  If I could keep this speed up all the time, I thought, if I could.  Damn, I'd be able to complete RAID (Ride Across Iowa in a Day).  RASDAK ready I said to myself. 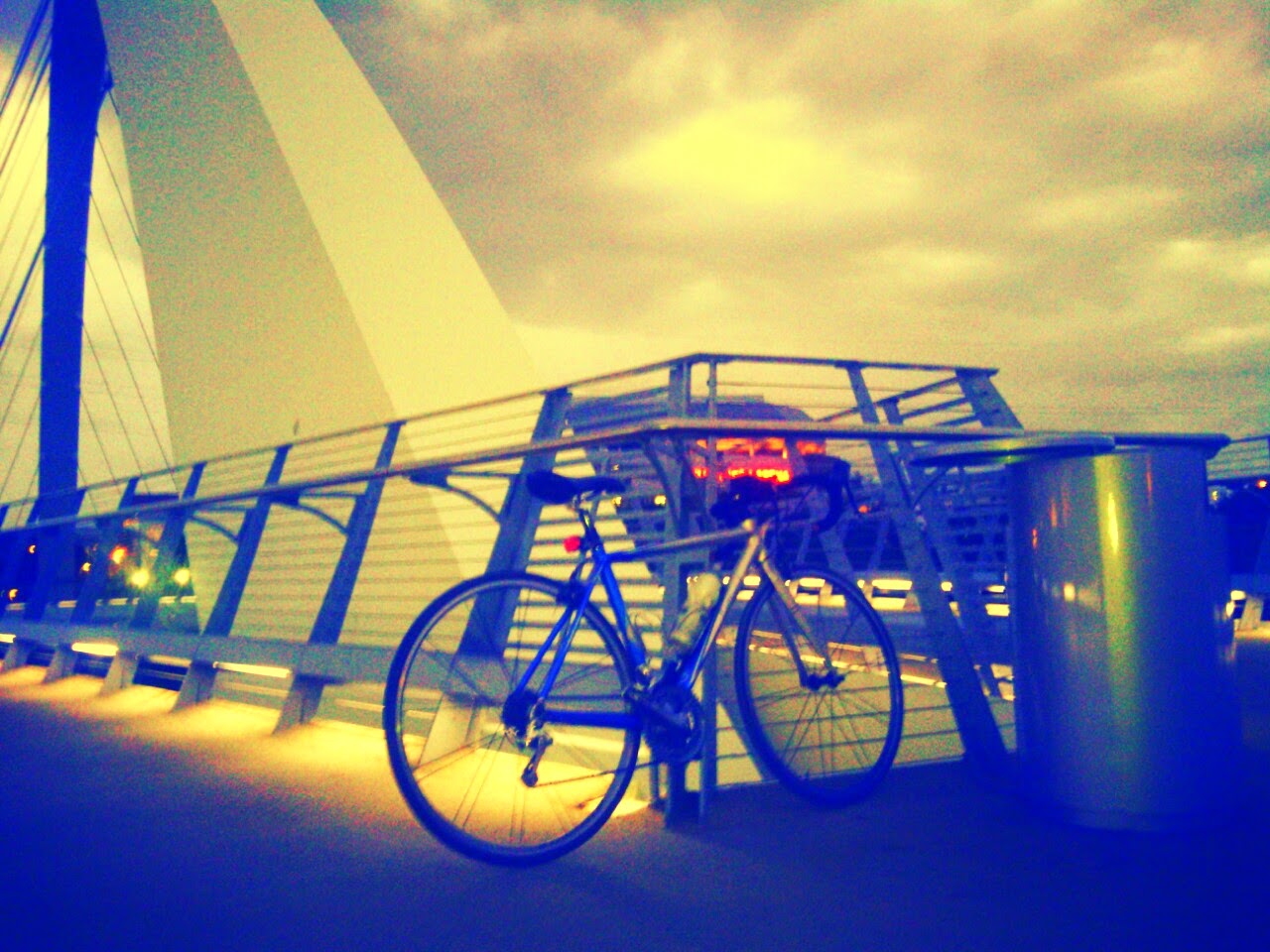 It never rained.  We literally jumped off the bikes and cyclocross them inside the house.  But the sky cleared up.  Yeah, I bet the clouds were laughing having chased us home.  Turn about is fair play.