"You won't get vary far," she said.  "Yeah right.  You don't know what I have been through today," I said under my breath.  Have 520, will travel.  I rounded the curve and saw what she was talking about.  Full stop.      Slow forward until the water is past the ankle and stop.  Under the bridge I estimate it would be up to my thighs.  OK, this time I will heed the voice of caution.  I had ridden from 128th to 63rd and hit a dead end on the trail.

Not the first warning I heard this week.  Out of the darkness Tuesday morning a bicycle stopped to tell me that the water was high.  The Raccoon River left its bank 1/2 mile west of Irish Run horse stables.  I had to push the bike through tall grass and weeds to a train track on top of a levy and ride between the rails to the well worn "flood" path that people created when Walnut Creek spills over the trail under the train trestle.

The winter that never ended turned into the rainy season that will not end.  There was at least a month that I could only ride the bike twice a week to work because it rained every Wednesday, Thursday and Friday.  How many weekends did it rain.  While we are happy that the drought has ended we wish that the monsoon would end.  Now we are losing trails.  Always the first victim.

Most of Des Moines' trails are built on land that people did not want.  Why?  Because most of this land is a flood plain.  Almost 200 years of Whitey destroying the wetlands that populated Iowa and redirecting the flow of rivers causes this.

But this year it seemed to happen overnight.  I made my 17 mile round trip to Windsor Heights on Monday.  Once the sun came out it was a beautiful day.  Everyone was on the trail.  Bill Riley and Walnut Creek trails. I remember looking at the river where the trail parallels it and noting the height of the water.  There is a steel fence on top of a concrete slab and two culverts on the other side of the trail that drain water runoff into the Raccoon.  The river was up to the cement channel but not close to the slab.  Barely 12 hours later it was almost to the top of the fence.  One storm after a weekend of rain.

I took the Clive Greenbelt Trail home on Tuesday as I do everyday unless there is snow because the city of Clive refuses to plow this trail.  Tuesday it was fine.  Walnut Creek, the body of water the trail follows was well within its banks.  For the past few weeks I have seen people fly fishing in it, driving ATVs and kids playing in it.  25 hours later it was another story.

From 128th St to 100th it had several large puddles.  Not from the creek but from the rain that hit us two hours earlier.  The ground being so saturated had no room to store the new water.  So it collected on the trail in 50 feet long and 6 inch deep expanses.  When I crossed 100th I noted the height markers, 6'.  but the further east I headed the higher the creek was.

I was joined by a young man on flat bar Trek with one pannier.  We took turns entering the water first.  No issues despite having road tires and 4 panniers on.  Surefooted in this mess.  I looked to the right at 7 Flags Event Center and saw the problem.  Water was cascading to the creek rapidly, trail be damned.  All the rain water was making its way back to where it came from.  walnut Creek to the Raccoon River to the Des Moines River to the Mississippi River and back home to the Gulf of Mexico where it will be vaporized and lifted aloft and sent back to Iowa in the form of rain or snow.  The cycle of water life 101.

Tuesday the 86th St underpass was a muddy mess.  The creek did cover the trail there but retreated leaving 2" of mud.  Today I knew better.  Flat bar Trek kid planned to cross 86th from above.  I got off the trail and took Swanson and University instead.  We met up at 515.  But here I saw the future.  the Walnut was at the bank and seeping over to the trail.  The last bend before the 73rd St underpass was flooded.  Turn around and take University again.

I planned to take Ingersoll since the trail south of Grand would be flooded from the rail trestle all the way through Water Works Park.  But I had to cross 63rd St first.  That is where the woman came in the story.  Tall and ginger with her husband and child, she was checking out the flood herself not commuting home herself.  Probably a runner given her height and skinniness and lack of chest.  Not the first family I saw today.  I wonder if she thinks I went for it.  They were walking back toward the dogpark.  I did not pass them on my reroute.

For a moment I thought I was going to pull out Google Maps to find a safe way around this latest obstacle.  The it hit me.  The service road.  Take the service road.  Not so much a real road but merely a wide path, wide enough for a truck to get through if needed for utility work.  this "road" is overgrown with weeds and trees and shrubs but is recognizable as an access.  I have a friend that likes to relieve his bladder here, hidden from all other trail users.  But I have two other friends that used that road to get to Charlie's Filling Station for cheap beer.  I saw them on Monday during my foray into Windsor Heights.  Since the removal of the Grand Avenue bridge over the creek crossing into West Des Moines or Des Moines via the trail has been very difficult.  But Craig and Angel took the service road to get to 63rd.  How fortuitous to see them on Monday!

So I entered this road, relieved my bladder and pushed the 520 up the cliff to 63rd St.  Traffic was heavy but an opening emerged and I was able to walk the bike across the street safely.  Then I headed south to the "closed' sidewalk, and used the rail bridge on the other side..  Second time this week on rail tracks.  I started thinking about the movie Stand By Me when I heard the whistle blow.  But no train appeared.

The rest of the way home was easy.  Exiting the bridge I was at the Grand Ave McDonald's.  Ride around it and work my way to Ingersoll Ave.  I stopped at GT's for a beer and to text Mary.  She was 20 minutes behind on a safer route but caught in the rain.  Yes, two bikes to clean this week end.

I hope this rain ends soon.  Water Works Park needs to dry out before Ragbrai comes to town.  One of the metro's most popular trails is out of service, too, at a time when it should be used the most.  Prays for blue skies. O Lord, close the floodgates, please.  Amen.

The Eagles have Flown Away 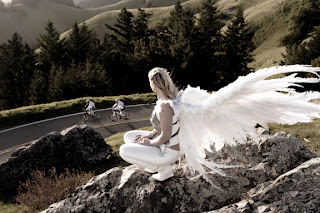 I spent every Sunday since the beginning of November on the Des Moines River Trail.  For those of you not in the know, the DMRT is the metro's newest trail linking Mullets to Cownie Baseball Complex following the Des Moines River and Hartford Ave.  During winter many bald eagles take up residence along the river in order to feed themselves from the open water.  I estimate at the heart of the winter there would be as many as 40 eagles in the air and trees along the trail.

My purpose, however, was not bird spotting.  Rather I decided to put the bike to to work of good rather than for my own vanity and entertainment.  I delivered Holy Communion to the home bound on Sunday.  Two main people plus their caretakers.  Two stops.  Rose was the furthest and usually my first stop,  She was the reason I took the trail.  Bob lived just a few blocks away and thus the trail was not necessary.  But I would take the trail from Rose's home to Bob's.

As the winter slowly wore out and left the eagles thinned out.  Soon double digit numbers of these birds were not to be seen.  One week I did not see any, just heard one.  The next week I saw 1 juvenile and one adult.  And then I saw no more.  All left for their warm weather homes.

Never really thought about it until today but as the number of eagles decreased so did the health of Rose and Bob.  Just a coincidence.  Spring was upon us.  But there was a reason my two charges never made it to church.  They were dieing.

The last few weeks it was evident.  Rose no longer would be waiting in her chair.  Bed ridden.  The last time I saw her I do not think she was conscience.  Unable to swallow and having to receive water through a sponge it was over.  All I could was pray for her and her family, a family that worked hard and sacrificed to attend to her needs, doing what she could not.  She died just over a week ago at home with her family.  Not alone.  What more could one ask for.

Bob was always in his chair.  But his family said he was getting worse.  Finally he stopped eating.  2 weeks later he passed.  That was today.  I found out in an email.  His daughter called me later, in tears to tell me.  I had not seen him for a week since Mary, his daughter not my wife, was now able to drive and bring him the Eucharist herself.  I did visit once and had a long conversation with him.  Wish I had another one.

How the end always is...Time does not stop for the grieving.  The world goes on despite the suffering and pain those left behind endure.  Sure, some bereavement time but life and the world go on..

"It's a wild world out there And nobody gives a damn In cold blood we don't care
And we don't want to understand." *

No amount or arrangement of words and language will stop the pain.  All the time we watch someone die we live in denial and hope against hope for some miracle.  To selfish to realize that when the ill and worn out pass away their pain and suffering have ended.

Irish wakes.  Celebrate life.  Stay young.  When you get old you give up and begin to die.