The Covid Files #2 Rides of Isolation The Rolling Prairie Trail 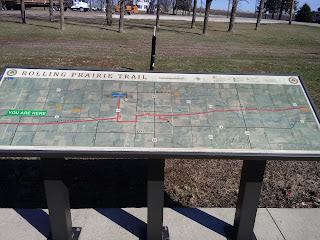 I have started a series of riding reports to document my social isolation of empty bicycle trails and rides throughout Iowa.  I did not possess the luxury or chains of working from home.  I am forced to go on vacation, made redundant, laid off, furloughed because of the Covid-19 pandemic.  But I have a lot of sick days and PTO that I can burn and of yesterday, Mach 30, 2020, the ability to file for unemployment.  So if this time is on my dime I will make the most of it.

The second great Covid Files Rides of Isolation took us to the Rolling Prairie Trail way north of Ames but south of Mason city.  Mary has Mondays off so she accompanied me as the stoker on our touring tandem.  This trail has been part of discussion among our cycling team, Mary's Heroes, since 2018.  I believe Donnie discovered it while on a business call in Hampton.  Looking at the map it seems like a wonderful long trail of significant distance with the possibility of touring/camping/exploring for a day or two.  No plans were ever made, just a trail on the back burner of our minds as perhaps a route for a longer tour or alternative Ragbrai.  Then The Event hit and I found myself with a lot of free time. 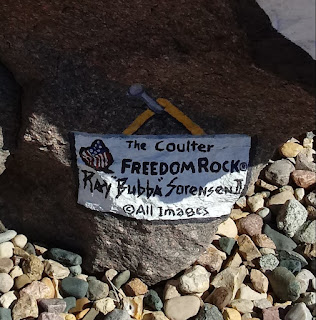 We drove.  90 miles each way.  This became the first test of our Honda CR-V with the tandem.  Bicycles are safest inside the vehicle.  The Honda can easily hold two of our bikes inside the back without taking off the wheels.  Three bikes with front wheels and bags removed which allows for a third passenger to legally sit in comfort with a seat belt fastened.  Now the tandem.  Remove both wheels.  I was able to get inside all by meself!  It would have been easier with our other tandem because the racks, both front and rear increase the size.  BUT knowing that part of this trail was not paved I thought the touring tandem's 26x2.1 offroad tires would be needed.  They were, believe me!

Coulter, Iowa, was the destination.  Located just off I-80 it was an easy drive.  We stopped at the rest stop at Dows, Iowa, then proceeded on the county road C47 east then S25 north into Coulter.  The trail head was on this road and easy to spot.  Ample parking.  Safe parking, too, guess who failed to lock the doors??

The trailhead is marked by a Freedom Rock.  Painted on one side is the image of Hampton native Fleet Admiral William D Leahy.  Other features include a shelter and a statue of an eagle and one of a soldier paying respects to a fallen comrade.

Time to roll!  Crossing the street we encountered a crushed limestone surface.  Due to recent rains and recent snow melt the trail surface was soft.  At the first intersection we stopped to let air out of the tires.  Low pressure wider contact and less sinking in.  We rode on the north side of the trail where there was more exposure to the sun in hopes of a drier firmer surface.


The terrain is a typical northern Iowa glacier flat marked by farm fields and the occasional road crossing.  The trail itself was built on a former rail line thus a flat journey.  The ditches often had water and the wonderful chorus of frogs waking from their winter hibernation.  Pheasants would often break the silence with their noisy take offs.  Once, three deer jumped from a cover of trees and crossed the trail to run across a barren cornfield.

Other than stop signs and the occasional caution sign the trail is not marked.  4 miles into it there is a bench and a shelter.  A mile or two later just before the Highway 3 overpass a bench sits on the trail.  Not in the middle but on the trail.  At 7 miles a gazebo and kybo appear on Highway 134.  The highway has a bike lane going to and from Beed's Lake State Park just 1.5 miles north of the trail.  We rode there but did not take the time to fully check things out.  According to locals, a wonderful view of the dam is there.  This state park is one of two on the trail system up here.

Back to the gazebo we notice that the trail ended.  First thought it was a farmer that refused to sell but further investigation reveals that we were now on the city of Hampton's part of the trail.  Taking the bike lane toward Highway 3 a paved trail appears.  This pavement takes one all the way to the other side of the city and past a Casey's convenience store.  We stopped for a slice of pizza and something to drink.  The special was an energy drink at 25 cents per 16oz can.  We could not refuse.

The next town would be Hansell, Iowa.  The pavement ended outside Hampton and the trail surface was a little rougher than the Coulter to Hampton section.  Not much in Hansell so we rolled on.  The surface got worse and worse.  As Franklin County's conservation website says, "the surface of the trail in this section is more accommodating to mountain bikes and foot traffic." This is a massive understatement.  True, our tandem is a mountain bike and has MTB tires,  I was desiring wider tires or a fatbike tandem the further we ventured east of Hansell.  A section was rail bed rock, the purple stuff, followed by cinders.  At this point we noticed a lack of signage except for the red "AUTHORIZED VEHICLES ONLY" and wondered if this was the not open section of the trail.  One bridge/culvert lacked siding railing.   After the second intersection we saw little sign of improvement so we turned around and headed back.  On the outskirts of Hampton we stopped and chatted with, at a social distance, two locals on bikes.  They said the trail had been open for three years and that we need to see the dam at Beed's lake State Park.


One last stop at the gazebo.  The kybo was still locked.  We ate Larabars and drank the 25 cent energy drinks while resting our legs which took a beating east of Hansell.  Once back on the trail we laughed about how soft the trail seemed in the morning.  Now it was welcome.


I hope they are able to complete the trail.  According to Traillink.com this will become a 80 mile trail system linking up to Oelwein, Iowa.
Posted by CHE at 10:21 AM No comments: