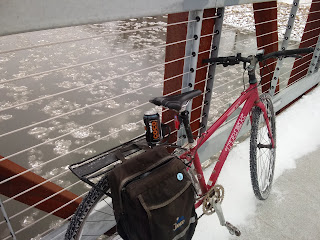 11*F with a powerful wind blasting from the North at 20 to 30 mph and there's 4" of fresh overnight snow.  Got up at 430 am to shovel and prep the CR-V to chauffeur my daughter to her 530 am gig.  Pot of coffee consumed.  Morning pills swallowed.  Time to play!  I'm itching to ride the Winter Bike in this frozen wasteland.  Sure, driving was fun but any fool with skills and a adapt vehicle can drive in snow.  Bicycling, that's a different game.  Been a long time since I rock & rolled!  Been a warm and snowless winter until now.

I think I rolled out about 8 or 9 am.  The roads were plowed.  I recall seeing the yellow flashing lights at 230 am when I took the dog out.  The trails were clear too.  Excellent job by the City of Des Moines and their workers.

I left my home and headed to the trail at Mullets.  The City cleared the snow off this trail already.  Took the Green Bridge, it had been cleared of snow, and headed to Hy Vee.  Needed coffee beans and a beer.  A red construction truck was idling at the hump at the north end of the Green Bridge.  The driver looked at me in disbelief as I crossed the temporary bridge built over the pipe that lays there waiting for the trench to be prepped for its burial.  But studded tires  gripped that surface and propelled me past him as if it was a summer day.

Hy Vee was not busy.  I rolled up after a homeless dude parked his 90's Trek 720 pulling a trailer full of possessions including a large black mat that I assume he uses to protect himself from the snow on the ground.  God bless him.  I hope he finds his way out to a better life.

Back on the road I head to the plowed MLK Trail and encounter runners.  They don't let the snow, cold and ice slow them down.  My turn is on 11th St into what is becoming Gray's Lake Station development.  lots of construction and they are working today.  I see some workers and shout "QUE HORA ES?"  They look at me and I answer my own question, "CERVEZA!!"  The Spanish speakers smile and laugh.  But for me it is almost time for a beer.

Now the asphalt path from 11th to the concrete trail was not clear but the concrete trail was and it was clear all the way to the rainbow Bridge and Gray's Lake proper and the trail to Mullets/Water Works.  The empty spaces of this area offered no protection from the wind.  This could be an issue until all the development is complete.  On the other hand, these are the salad days on this trail network.  It has not been discovered en mass.  Once everything is in place and populated I see this being a popular trail.  It is curvy and narrow.

I noticed two bald eagles in flight soaring on the air currents looking for food.  Majestic sight!  Only one eagle was near the nest at the lake.  I bet there 40 of them along the Des Moines River from SE 6th to Cownie Soccer Complex, a privilege for trail users to behold but not promoted as the one nest at the lake.

As I approached the bridge a car pulled up and a driver got out and headed into the woods between the new development and the river by Fleur.  Food and goods for the homeless camp.  A propane cylinder sat by the bridge.  Not for grill me thinks but for heating.

The Rainbow Bridge had been plowed by the time I got there.  Salt and sand, however, were missing.  Normally on trails this is not big deal if they get the snow cleared off before trail users start smashing snow into ice.  But on the bridge with the strong wind drifting snow coated the bridge with black ice.  This is very noticeable by the railings.  Very slick.

I parked the bike and watched my footing as I cracked open a delicious can of West-O's CoCo Stout.  Chocolate stout on a winter's day.  I wanted to get a beer named after a dog since Rainbow Bridge is a euphemism for the death of a beloved pet but I did not see one before the West-O caught my eye.  About that time the bridge began to shake.  I thought it might have been from the wind but it was just a large man crossing to the north.  Never noticed this before.  I apologized for lacking a beer to offer.  He laughed and continued north.

One and done.  Phone died quickly in the cold and from use.  At the south bridge landing there was salt.  The lake trail was clear and my ride home was easy because the wind was not in my face.  Only a few trail users out.  Did I mention it was very cold and windy?  But people need to be able to use the trails for recreation and exercise and the occasional bridge beer as an open act of defiance against the winter.

After I got home we made and ate breakfast.  Then sat on the couch watching TV.  I image before television many many years ago since the beginning of humanity living in the Ice Age, once the chores were done and food gathered I'd be sitting on fur rugs staring a fire inside my home waiting for Spring or the need to venture outside into the cold for sustenance.  Is the TV the modern fire pit of the modern cave dwelling?  The leather couch my fur rug on the ground.  My dog at my feet the recently domesticated wolf pup?  And the homeless dude with the Trek, all the homeless Iowans living in the woods, his long door mat his fur rug?  Have things really changed? 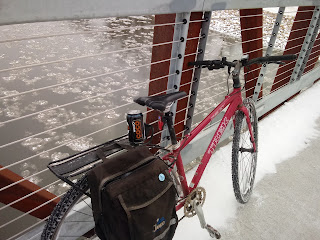