Winter was going so well.  Warm and dry.  No snow or ice.  Back in December I stopped dwelling in "lack of riding" depression and started pedaling for miles again.  Since I transferred downtown my 30 mile round trip commute dropped to 5 miles per day.  No more 10,000 mile years.  The last week or so of 2019 I rode two bikes enough to get both of them over 1000 miles for the year.  The more I did this the better I felt.  For 2020 I am planning to ride more per month than I did in 2019.  It started off well.  Then Winter arrived.


January 10th it started shortly before I left work at 130 pm.  Freezing rain.  I had the foresight to ride The Red Phoenix, my winter bike with studded tires.  By the time I got home my clothing and the bicycle were covered with a thick layer of ice.  Then the snow began as I was at my local barber, Gomez barber Shop.  Big giant flakes of snow not dandruff but a pile of grey hair grew on the floor below me. 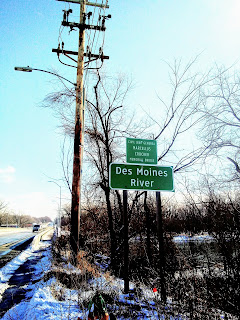 But I like to ride in the snow so I went on short rides to explore and see how well the city cleared trails.  Saturday I did what I call the Rainbow Bridge Loop, a sometimes 10 mile ride through Gray's Lake and Water Works Park and downtown.  The trails were clear.  However, the bridge itself could have used some ice melt/salt and sand.  The high wind plus snow left a a very slick glaze on the surface especially near the railings of the bridge.  My bike was fine but off of it a lost footing a few times but never fell.  Sunday I managed to get in 18 miles.  This was in response to a question I had about the condition of the Neal Smith Trail.  Saturday night I decided that I needed a few things from Modern Bike before Wednesday.  If I could ride my bicycle there on Monday to pick them up, all the better.  The car would remain put.  But nobody knew the condition of the trail so I had to see for myself.  Since my daughter had to be at work at 530 am on Sunday I decided to drive to the suspicious part of the trail myself, Birdland Dr behind North high School.  Birdland was not clear and when I got to the top of the hill near North i turned the CR-V west to illuminate the trail.  Untouched.  A few hours later I rode my bike to get a better view.  Typical.  The City has always neglected this trail during winter and this was no surprise.  What I found were boot prints and bicycle tracks now harden into ice to make the trail bumpy.  Cratered is the term I use to describe this but there was enough room on the sides to get through smoothly.  I rode all the way to modern Bike to make sure I could get through.  One thing to note was that the sidepath along the Douglas Ave bridge over the river was cleared and salted.  this is the the bridge named after Civil War General Marcellus Crocker.  Modern Bike did not have the stuff in on Monday so the real ride was delayed until Tuesday and I made it a 21 mile day as I added a visit to the rainbow Bridge on the return.  The City did a great job clearing snow from the trails.  But all of that was about to end.


Friday was Dooms Day as the weather people predicted a major storm, high winds and a deep freeze to hit Des Moines.  And they were right.  Once again my red bike was the bike of choice although a fatbike may have fared better.  The problem was that the snow began about 930 am and did not let up for several hours and when it did freezing rain replaced it.  Cycling home was very difficult.  Plows could not keep up.  Streets were a mess.  I rode sidewalks mainly since they were clear.  Yes, I am grateful for corporations and their corporation buildings.  These people clear their sidewalks pronto.  Speaking of which, Mary and I cleared our driveway and sidewalk that night when it was 32*F instead of waiting until Saturday when it would be 10*F with 30 mph winds.

I stopped at Hy Vee on the way home Friday for a few items necessary for dinner and a can of beer.  As I was unlocking the bike I heard someone ask me if I wanted to race for $100.  Looking over I saw a man with a 70s vintage Raleigh 10 speed locking his bike up.  We laughed knowing how bad the roads were.  I probably had the advantage of better traction and lower gearing for acceleration but lacked a C Note for the entrance fee.  We wished each other luck.  5th street was fairly well plowed all the way to the Hump and I was able to ride up and over the temporary bridge without having to put a foot down.  Once on the Green Bridge I stopped to drink that can of beer.  SingleSpeed Brewing Cold Rose sour beer.  Very good but a gust of wind knocked it over and much of the contents spilled out.

Saturday.  The shoveling was done the night before so I decided to ride the bike.  Actually, the lack of pancake syrup forced the decision.  I could have drove but did not want to despite the fact that our street had been plowed by 330 am.  I made a 3 mile round trip to the downtown grocery store, Hy Vee, to fetch a bottle of fake maple syrup and a can of beer.  On the return trip I stopped on the Green Bridge, put my back against the wind and drank said beer.  Notice a pattern.  Kalona Brewing Co Start-Up Stout.  7.6% which is fairly strong for a breakfast beer.  It was cold as hell.  the wind was howling at 30 mph from the WNW.  Although the trail by Mullets to Gray's Lake was plowed the night before some parts had drifted snow before the freezing rain added a protective layer over the snow.  It was crunchy.  the exposed parts were a different story.  The wind polished them.  Early on the rear wheel would spin out.  I had to use less pressure on the pedals to prevent this.  On the other side of the river I stepped on one of the clear sections and discovered that was indeed extremely slick.  The only bicycle tracks were my own.  that was it for Saturday riding.  To the store and back.  Time to become one with the couch.  we did take the vehicle out to give my son and his a friend a ride home from work about 330 pm and to get gas.  Winter played a joke on us.  the gas tank flap was frozen shut and required chiseling and prying before it opened.  Lots of Bigfoot wannabe pick up trucks were on the streets.  Our little SUV, despite being tall enough to clear the snow, looked miniature in comparison. 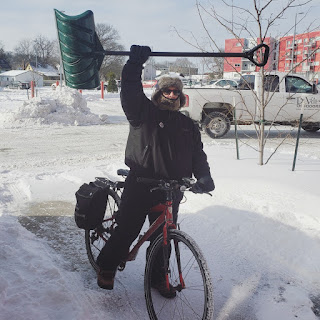 Sunday had me out on the bike twice.  First to Church at -3*F since I was scheduled to be the Lector.  Afterwards I stopped at home, added another layer, a shovel and a beer.  My daughter and her husband Jesse had their Toyota Camry blocked in by their apartment's snow clearing service.  So I decided to give them our spare shovel.  I carried it with my right hand as I pedaled over.  The rear brakes on that bike stick so I don't use them anyway.  After dropping the shovel off it was off to the Green Bridge for a beer.  -1*F now.  Stella's midnight Lager, a most excellent dark beer that sadly is a seasonal promotion.

The second ride of the day was with Mary.  We met Cynthia downtown and hit 3 of our favorite pubs for a chance to get out of our homes and prevent ourselves from becoming stir crazy.  Fun night.  All of us had the next day off as it was Martin Luther King Day.  I wonder if he ever experienced the temperature dropping below 0*F?

Then the warm up.  The wind calmed down and the temps hovered at freezing or barely above freezing but it felt great.  We could go outside with dressing up like astronauts.  Ice was no longer an issue.  Once again a storm hit on Friday but I was able to shovel without wearing a coat.  Somehow I feel like the worst is over, the worst, of course means temperatures far below zero.  Spring is inching its way every moment.  Ragbrai route was announced and BRR is next weekend.  Just another month or so and I can park the red bike until next season.

The relative warm weather lasted through the first weekend of February.  That weekend in the Iowa cycling community is known as BRR Weekend.  The Bicycle Ride to Rippey has been held the first Saturday of February for the past 43 years regardless of weather.  it is a 24 mile ride from Perry, Iowa, to Rippey, Iowa. The first BRR I did was in 1992 or 93.  I took a Cannondale road bike.  Since then Mary and I have taken the tandem, MTBs, touring bikes ect.  It is a great day to spend outside with friends.

This year I took my "gravel" bike (heavy roadie) and Mary a hybrid.  We hooked up with our team, Mary's Heroes (Donnie, Joe and Nick) and rode the 24 miles as fast as we could.  I don't know why.  We did stop 6 miles into it for a beer and at Rippey for food and beer and to visit Colin, DJ Chop Shop, who was providing music.

Sometimes we skip Rippey and ride to Bouton, Iowa, but the gravel road promised to be a quagmire of mud in the 45*F sunny weather.  But I did not want to stop at a car wash on the way home and put two really wet bikes in back of the CR-V.

On the way back ti Perry we saw all our rowdy friends ride to Rippey.  How I felt like turning around and spending time with them.  But that would have been bad.  Darkness and drink.  Been there, done that.  As it was we got home with the last rays of sunlight bathing Des Moines and memories of a fantastic day.

January is over.  February is short.  Green grass by St Patrick's Day???