My Most Neglectful Mistake at High Speed 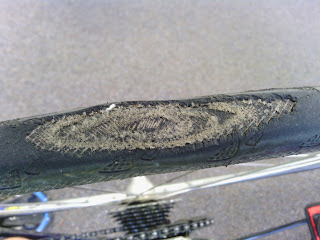 If this incident occurred on the starship Enterprise there would have been all sorts of alarms, klaxons, and shouting.  "Inertia dampeners offline!  Warp core breach!,  Hull integrity compromised!.  Enemy ship still attacking!"  Instead I only heard a loud screech.  A loud $55 dollar screech.

It's Tuesday in early June.  One of those days when it is still a bit chilly in the morning but warm in the afternoon.  I had to put on a long sleeve shirt to keep warm when I left my home at 430 am.  Since I took a road bike I used a laptop bag to carry what I would need for the day: wallet, keys, medicine, pump and tire repair.  I would stuff my work clothing in this bag for the trip home.  I would have to carry the morning shirt home since my short sleeve shirt would be adequate.  61F for the ride in, 84F for home.  Since my administrative assistant was on vacation I needed to be at work not only on time but earlier.  Since there was no work clothing to ferry to work I could get there quicker on a bagless bike.

In the past I have been able to secure a jacket or this shirt on the outside of the bag.  For some reason I thought I could get by with it draped over the main body of the bag and having it in between me and the bag it would stay put.

The wind was from the south.  I was feeling particularly strong and healthy on the way home.  On NW 123rd heading north I was already in big ring.  The speed limit was 25 mph and approaching was a hill with a curve along Campbell recreation Center Clive, Iowa.  I love this hill.  Zoom down it and then zoom up the other side to get to the sidepath on 128th that leads to the Greenbelt.

There was a car behind me.  I reached for the shift lever, downtube, and pushed it forward.  I was surpassing the speed limit, something rare for me, 30 mph was the last I saw on the Cateye before my attention was diverted to a most pressing issue.  The pedals locked up!

I looked down at them, nice and parallel with the road.  But that did not matter now.  Something was deadly wrong with the bike and I needed to safely come to a stop at a safe place.   A new sound was entering my ears.  The screech of a skidding bicycle tire.  Now the bike was beginning to buck like it wanted to throw me off of it.  It took a lot of strength to keep it upright and guide it to safety.

The entrance to the park appeared but I was still going too fast to make the turn.  A significant change in direction would have slammed me to the pavement.  As it was the bike was moving toward the curb which was preferable to heading out to traffic albeit traffic is light on this road and was probably empty now.

Finally I reached the curb and my speed was totally scrubbed to a point where I could unclip and stop.  The bike failed to buck me off like a bull or mustang.  Time to find out what the trouble maker was.  My shirt.  My shirt was sucked up by the wheel and jammed underneath the rear brake.  The wheel could not move.  The shirt would not move either.  I had to remove the wheel to free the shirt.

I looked at the road and saw a thin black line leading to the curb.  Time to check for damage.  Funny how this works.  Everything looks fine until the end.  I was thinking that I merely reduced the life of this tire as I spun it and it looked good.  Then I saw it.  Several inches long.  No rubber just kevlar threads ripped.  The very bottom of the tire left.  Miraculously the tube was not exposed although not much tire left to protect it.

What do we do now?  Call for help?  Walk 13  miles?  Walk it to Barr Bicycle and purchase a new tire?  nurse it slow to Anders Olson's baseball card shop, The Rookie, maybe 2+ miles away and see if he has duct tape that I could use?  Yes, to The Rookie! 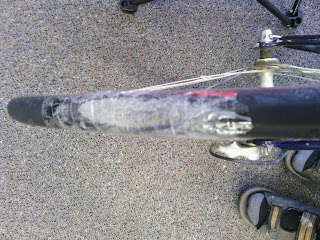 I rode it.  Tried keeping as much weight as possible on the front wheel.  Avoided every crack, rut, stick and debris as I could.  I made it, tire still inflated.  No duct tape but he had packing tape.  Wrapped the wheel up with 2 or 3 layers of patches and wrapped those.  I learned this trick from Brad Dagget.  He once completed a few days of Ragbrai with a tire duct taped.

11 miles.  Take it slow.  Avoid cracks, ruts, sticks and debris.  Do not go fast.  13 mph is good.  So what if everyone passes you.  Forward progress.  You have extra tires at home.  Just keep going.  It will be over soon.

One stop on Water Works bridge for a beer with Craig and Kelly and other friendlies and then 3 and half miles home.  I made it.  Tire still wrapped in tape and inflated.  The tape patch worked.  the tube held.  Put the bike away and ride a different bike tomorrow and the next day and the next until the tire gets replaced.  It's good to have several bikes.  Now if I can remember to secure loads.

I would have to say that Continental's Gatorskin tires are outstanding.  Any lessor tire would have blown IMHO.  Well worth the money.  Such a shame is that this tire had a few thousand more miles left in it.  Another shame is that I could not replicate this for the Midwest Bicycle Rally Skidding Challenge.  Ask Loco Joe, he can tell you! 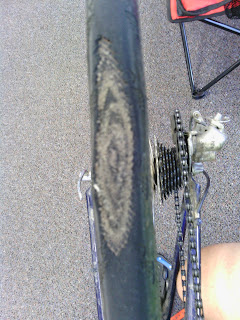