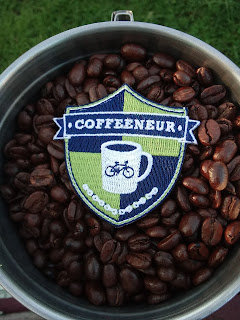 Perhaps the most enjoyable Fall Cycling Related Activity, the Coffeeneuring Challenge has begun.  This is a bicycle ride for coffee.  I am endeavoring to ride a different bicycle 7 times to 7 different locations for coffee during the next 7 weeks.  For a less scattered brain explanation click HERE the official page for this activity. 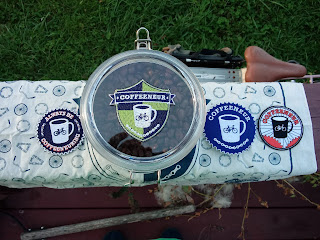 Wonderful autumn afternoon.  Woke up and the outside temperature was below freezing. Around noon we went to a friend's duplex and helped her clean as she is moving out at the end of the month.  By the time we returned home it was warm enough to ride bicycles without dressing like an astronaut and my morning coffee was completely processed by my body.  Let's get the challenge on!  I decided to ride my Verenti Substance "adventure/gravel bike which I have not rode in a few weeks.  DSM Brew is our favorite coffee shop.  Conveniently located a little over a mile from our house and on the southern edge of downtown.

Mary had her usual iced vanilla latte and I branched out to the Pumpkin Spice Latte, do not judge me, and that's what I told the barista.  To mix it up I ordered it as a breve.  Normally I order 3 shots over ice fill the rest with half and half or a dark roast coffee.  I should have ordered it as a latte as the half and half came out a bit foamy.  He apologized and said he would fix it if necessary.  I had him add cold half and half.  I like my coffee a bit cooler.  Tasty.  I normally don't add sugar or syrup to my brew nor whipped cream.

My city, Des Moines, Iowa, is known as "The City of Bridges."  Two major rivers meet in my fair city, The Des Moines River and The Raccoon River.  The Jackson Street Bridge was a very important bridge for the citizens of Des Moines.  It allowed people to cross the Raccoon and go to work in downtown and return home.  It is a steel bridge that originally had a steel driving surface.  The bridge was retired from vehicular traffic in the 2000s and converted into a pedestrian bridge.  New wooden surface, fresh coat of paint, some structural safety work and a huge donation of LED lights make this a favorite bridge for cyclists, pedestrians and people walking to the nearby baseball park, Principal Park.  Despite the removal of benches, cyclists who enjoy "bridge beers" frequent this one.  For more information read HERE

I enjoyed a limited offering of West-O Brewing Company's famous CoCo Stout.  It is a chocolate stout brewed with coffee and vanilla beans.  "Canned for the Venturous."  Not just coffee but COLD PRESS COFFEE.  I like this type of beer in the colder months and it was a cool morning.  I found this beverage a bit sweet but I knew that going into to this.  As for the location, very nice and full of memories.  I recall driving on this bridge.  Now we meet friends at night and watch the fireworks after the baseball games.

It was a rainy Saturday morning.  Mary rode to the farmers market with our eldest child while I completed the previous entry.  Eventually it looked clear enough.  I text Mary to meet me at Plain Talk and then set to prep my 1994 Trek 2200 road bike.  I have not ridden it for months.  Since my theme within a them was to ride a different bike for each coffee the good old carbon rod was on the list as eligible steeds.

Plain Talk does a lot of good for people with special needs and disabilities so I like to support them.  Maybe this is a another theme within a theme, drinking coffee from places sponsored from Optimae LifeServices.

Normally I get espresso from here so a dark roast was something different.  Smooth.  I also had their breakfast special, a sriracha breakfast sandwich on an Asiago bagel.  Lots of avocado!  Totally delish!  They smiled when I told them it was great.  Apparently, the idea was from one of the staff. 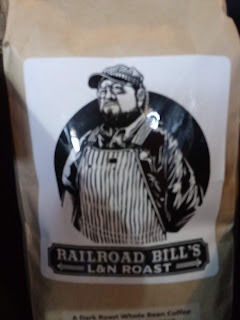 Railroad Bill's is a sister diner of the organization the owns Plain Talk Books & Coffee.  It is located in an old building in Des Moines that also houses a antique shop and used vinyl records.  We had a "15 minute" wait before we were seated which allowed us time to shop in the store.  I found a record that I wanted so I was happy but the wait seemed forever.  Once seated they took our order and I got an omelet and coffee.  Coffee was $2 self serve with free refills.  They have their beans roasted and labeled with Railroad Bill's image on the bag and available for sale. 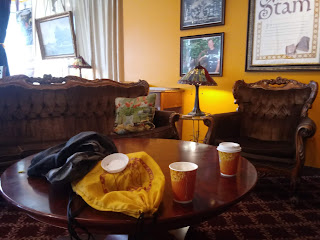 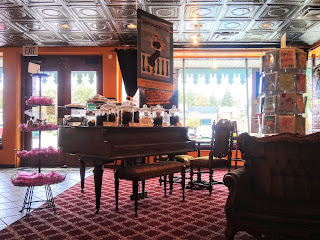 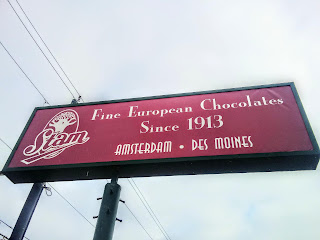 As a cyclist I prefer to support businesses that support cycling.  A token of support is providing a secure place to park one's bicycle.  We were on our way to Zanzibar Coffee Adventure but noticed there is zero bicycle parking or a place to park a bike that would be visible and secure once we were inside.  We could have locked them a half block away or on the bench on the neighboring business but that was way out of sight.  Mary was a recent victim of bicycle theft and theives in our city carry bolt cutters so we moved on down the road.

Chocolate Stam was Mary's call.  I've never been there before.  It is a part of a chain that sells fancy chocolate.  Lo and behold they have an espresso machine!  Good call Mary.  Parking....no rack but we were able to lock up on their large sign and had a view of the bicycles from inside.  Mary ordered her usual, an iced vanilla latte, she does not like coffee as much as I do, but the barista said she could not make an iced latte do to the espresso machine.  I found that puzzling since I am currently gigging as a barista at work but I held my tongue.  She a hot chocolate instead and I the best breve I ever had!  The barista apologized for it being a bit foamy but the foam is what made it wonderful.  Rich and sweet to contrast and smooth the coffee.  Accident or design?

On this date we were driving to Minneapolis to see Peter Hook (Joy Division/New Order) & The Light perform New Order's 1989 Technique LP and 1993 Republic LP plus some Joy Division and New Order and the world famous First Avenue.  But we had time to kill.  This would be our first opportunity to ride bicycles downtown without the chaos of Farmers Market.  We were psyched!  Well until we saw the line.  Everyone else had the same thought.

After a 10 minute wait, maybe less, Mary got her iced latte and I my usual.  Honestly, I don't remember much about it which means it was not bad.

This was our second visit to this coffee shop, first time this year.  Last year they messed up my order.  No room inside so we opted to sit at the table on the sidewalk despite the fact it was sprinkling rain outside.  Hence the togo cups/mugs.  These jelly jars will save us 25 cents if we return with them.  Their reduction in single use paper and plastic products should be applauded.  But being the immature dinosaur that I am I had to laugh.  I'm just a 17 y/o stuck in this 50+ old man body and I wonder if I should even visit places like this again.  There's no hope, I can't relate.  I am not hip nor..I'll keep my fingers off the keyboard for a moment and suppress my feelings, it's a special need!  Just a few notes:  no half and half.  Whole milk is their heavy.  Mary's iced vanilla latte was shaken to chill it and poured into the jar without ice.  It was a bit tepid.  The jars did not break on the way home.
Posted by CHE at 7:42 PM 2 comments:


We live in an age where people are trying to correct the mistakes of previous generations.  An age when the high crimes and felonies committed by corporations are not longer tolerated.  A Time when taking care of our planet is increasingly becoming a priority.  People are becoming upset with the status quo and are taking action.  Yet there are some that do not care and scoff at those that do.  One such individual is the bank manager at the newly relocated branch of Wells Fargo at 801 Walnut St, Des Moines, Iowa, Branch 0018204.

My wife and I ride our bicycles to work year round.  We both live within 3 miles of our respected places of employment thus a 15 minute ride in the worst of times.  Not only does this give us a modicum of exercise, better parking, less consumption of resources and two less climate changers on the streets it is better for our vehicles.  Car trips less than a half an hour are bad for vehicles since they do not have time to properly warm up and eliminate all the moisture in the exhaust system.  But that is not the point.  Less wear and tear on the car and the planet.  There is no need for most people to drive if they live close to their job.

Upon seeing the bank manager, Mary innocently asked if they were planning to install bicycle parking at this branch.  The response was one the most rude, arrogant and unprofessional as someone in that position could ever give without using profanities.  It the the face of evil corporations, the type that Democratic Presidential candidates warn people about in political adverts.   He laughed and walked away.  Then he stopped and turned around and said that they would not be installing bicycle racks because they attract  "unwanted people."  I suppose these are people that they cannot issued fake accounts and other scams.  I guess we are unwanted.

So I tweeted this experience.  Guess what?  Wells Fargo has people that watch social media looking for such burning embers.  I got a response within minutes asking for details and promising to get back to me after a review.

I have no expectations.  Business as usual.  Time for a new bank or credit union.  But an apology and the installation of the Mary Guevara Bicycle Rack in front of the bank would go a long way.