He Said it Was a Bad Idea


Bookend commuting this week.  I rode Monday and Friday only.  Monday's ride home was one of the toughest if not the all time most difficult ride home ever for me.  Pretty sure I hit the Angina Zone a few times.  It was 11*F but it felt like 30*F because my body was producing a lot of heat.  So Tuesday I drove to give the city a chance to clean up the trails.  And Wednesday, too.  Thursday the Weather Guessers said we were due for another 8" of snow sometime Thursday night through Saturday so once again I drove so Mary and I could raid  a few grocery stores like Viking pillagers and be able to bunker down until Monday.  What a shame because Thursday would have been a great day to ride to and fro work.

Friday I rode and had a great ride to work for a winter day.  19*F with a favorable cross wind to work.  A bit of an interfering wind on the way home but I was going to meet friends at a local watering hole and took a great photo.

Back to the morning ride.  Just a minor dusting of snow overnight.  The trail was damn near perfect for what happened on Monday.  I had my clothing dialed in just right.  I was making good speed and very happy to be riding again.  It was Friday and I was going to have a great day!

Just a jet or so over 3.5 miles from my home lies the pedestrian bridge over the Raccoon River in Water Works Park.  As I approached the 90 degree right turn to cross said bridge, my lights illuminated another cyclist at the kybo.   When you gotta go you gotta go I thought.  We exchanged greetings and then he said "I think this was a bad idea."  That was his assessment of his situation.  I knew he was talking about riding his bicycle at what must have been 445 am on a trail still partially snow and ice covered and streets in worse shape.  It was a mere 19*F and if he was heading east or north into the wind, well, life had to suck.  "Tires, man, all about the tires," I said as I climbed to the top of the bridge.

In retrospect I should have stopped and asked if he needed help.  But then again he did not ask for help.  Not much I could have done for him.  I could have given him some cash or made a phone call for him.  I'm bare bones, riding clean.  Not even bothering to put the panniers on this bike.  Zero tools.  No food.  My water bottle probably was not frozen at that moment.  No extra clothing.  Time, I had none to spare.  Had to get to work on time and before I started getting cold.

A half a mile later I encountered Joe Ayers on a cross bike instead of a roadie.  There's snow and ice on the trail and Joe rides the appropriate bicycle.  We say hello.  I have not seen him all week so I actually said "Joe I presume!"  "Hi Chris!"  If something was amiss on the trail he would have said something.  After passing I thought that Joe could help the Bad Idea Man since Joe is retired and only riding for the sake of riding.

The rest of the trip was uneventful.  Once on University Ave I had to race to intersection to intersection to get off that road in case the snow plow was on my ass.  There were two plows working that road, blades down but not much snow to push.  They needed to drop a bit of salt and sand IMHO.  But The Red Phoenix climbed that hill quite well and then picked up speed once past the peak. 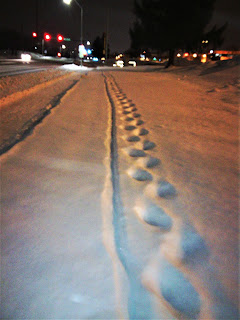 The last bit of the commute has me getting on the sidewalk/sidepath at 50th on the corner of the Sheraton Hotel.  There I saw my bad idea from Monday's ride home.  Perfectly preserved for all to see and a reminder of my failure/struggle/hubris/sin.  My tracks left from walking the bicycle when the sidepath was utterly useless.  They were several feet away from the path.  That's how far I had to get away from the shit the plow deposited on the trail.  I stopped for a few photos.  Amazingly straight for that death march.  A reminder that I should have gone straight to the trail and dealt with the 4 mph condition instead trying to cheat.

Well, it Was Safer Than Driving

Had I known that the consistency of the snow was akin to that of fine sand I may have drove.  But no, I got to be that person who brushes of the "ride safe" comments with "have a safe slide home in your car" remarks.  And that was working well with reports of multiple car pile ups brought to us by the 3 to 5" of snow that hit the metro.  But then again Todd Adamson rode his Surly Krampus into a school bus last Monday and more or less left his face there and damaged several vertebrae and hurt a knee.  So now the ball is in my court.  "My tires say Klondike, what do yours say?"

I tried to escape work early but my boss asked me to do something for him which delayed my departure but almost an hour.  Eventually I got to leave only to have to walk back to my office twice.  First time was because I forgot my light.  Once I put that on the bike I had to return to my office to grab my helmet.  At least I got warmed up.  It was like 11*F but the lack of wind made it feel more like 30*F once I warmed up.

The trip around campus told the story of the ride home.  It would suck.  The bike moved usually slow.  Still possible but it would be a long journey.  Just get me to the trail.  I was stupid and decided to take my shortcut to avoid a few miles of trail in hope for better time.  Wrongo boyo!  The sidepath was worse than the trail and I actually had to walk it hoping that my co-workers would not see me.  It was not plowed and had the extra snow that the snowplows threw on it from clearing the streets.  What should I have expected.  It snowed steady from 9 am and did not let up until 5 pm.  It could have been worse.  I saw a man in a wheelchair waiting for a bus.  He had to roll to the entrance of ADP in order for the para-transit to pick him up.

I eventually made it to the trail by accessing it at Greenbelt Dr.  Of course someone and their dog had visited the trail first,  But this time the foot prints became a guide since determining what was trail and what was not trail surface was obscured by snow.  By now the bottom pedal stroke was hitting the snow.  I could hear the tires squeak as it rubbed against the snow.  My glasses fogged up constantly making it harder to stay on the trail and more difficult to maintain best possible speed.  Breaks, I took a few.

Wishful thinking had me half expecting Windsor Heights having cleared their section of trail.  Nope.  Decision time was approaching. I was averaging 3 to 4 mph.  This meant that if I continued on the trail I'd be out for two more hours unless Des Moines Park & Rec plowed the Walnut Creek and Bill Riley Trails.  Even if they did and another 2" of snow fell on them it would still be an improvement over Clive's unplowed Greenbelt and Windsor Heights.  But this was a gamble I could not afford to lose.  Ingersoll Ave became my choice.

About this time I heard a voice of another cyclist.  He was on a fatbike making about 1 or 2 more mph than I was but having issues.  He had to walk it up the incline underneath 63rd.  He had issues with the snow just like I did.  I felt a bit better.  Maybe it is not just me or the hybrid bicycle I was riding.  I added steam and caught up.  We chatted a bit.  He thought there would be more fatbikes out, too.  He had a quarter mile left to ride.  Lucky bastard.  I  had over 6 miles if I continued on the trail,  Decision made.  Hit the streets!

That gamble paid off.  I climbed Ingersoll Ave from 56th to Polk Blvd at 5 to 6 mph.  Not bad considering that the road could have used a plowing.  Nobody honked at me.  They did honk at the Subaru that blocked the intersection of 56th and Ingersoll to allow a black sporty car to back down and pick another route.  And I did see many cars stuck at intersections spinning their wheels and ruining transmissions.  It was a relief to reach Polk Blvd.  Now to find the bike lane!

But the bike lane was covered in snow.  I did my best to stay between the lane and the curb.  Not an easy feat because the snow was what we refer to as mousse.  But I soon heard the cavalry.  Three snow plows in echelon formation heading my way.  I got on the sidewalk and gave them a thumbs up.  Should be easier now.  And it was.

Crossing MLK my objective was to reach the MLK Trail/sidepath.  Easier said than done.  17th was a mess.  Intersections were horrid.  Snow was pushed up high and I had to walk across them.  But the trail was plowed at one point.  A light up ahead gave away the oncoming bicycle.  Dude on a fattie not pedaling but pushing with one foot while seated.  Mechanical? 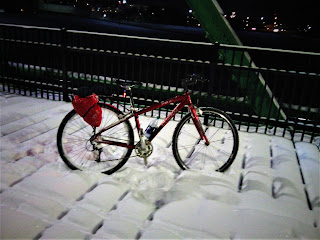 Soon I was at SW 5th and it was plowed to the Jackson St Bridge.  My ticket home.  I stopped for a photo.  The photo does not describe the hell I went through but it is a reminder.  Whatever they call the trail on the south bank of the Raccoon River was plowed at one point and it was easy riding until I reached Mullets.  Mullets was closed due to the weather.  SE 1st was clear so I took it to Jackson and then cut over to 3rd but it was a mess and I walked that block or so.  Got to my street and took the sidewalk.  Not shoveled except for our portion but the lack of car and footprints made it rideable as opposed to the street which was an awful mess.  As I pulled up to my home the mobile rang.  I knew who was calling and I'd be inside with her in 30 seconds.

Honestly, one of the toughest rides in my life.  At least I survived unscathed and can brag about it.  Whisky, I need whisky and a large glass of water.