I Really Think "They" Did Not Want Me To Bike

And by "they" I mean my arch nemesis, the bastard presumably responsible for it all.

First all, the weather.  Rain, wind and fog.  Despite having a wonderful Mother's Day meal, all the children showed up and Mary, for the first time ever did not have to share her day with anyone else.  After they kids left I glanced at the radar and determined that we could make it to the store without getting wet.  Wrongo but not bad.  We had to duck it out in a car wash for the worst of it.  But the ride was a success and we loaded the Burley with groceries and flowers and completed the 17 miler without further incident.

Monday was obnoxiously windy.  Slow going to work but at least it was dry.  For some odd reason I felt compelled to ride an extra 6 miles into the wind, 20 mph, to visit the Waukee Hy Vee on a rumor that they had copper Moscow Mule cups.  For the return trip I stopped at Caribou Coffee and slammed a small Americano, cooled down by half n half and water.  Big difference in speed.  On the way there I could muster 8 mph on the Trek Soho, Nexus 7-speed internal.  On the return more like 26 mph! 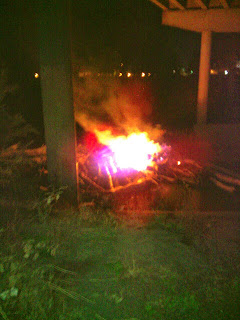 Wednesday was the day of obstacles.  Fire and construction.  On the way to work I spotted a fire underneath the SW 9th bridge along the bike trail.  Trees that get washed away in floods and rain collect on the river next to bridge pillars.  The city removes a few every year but most remain and the number gorows and grows.  Well, someone or something set fire to them.  I stopped for a photo and then debated whether I should inform the authoritons about this.  Part of me wanted the fire to continue since it would eliminate this eyesore.  But I feared the fire may damage the bridge.  I dialed 911.

Then with 3 miles left to go a resurfacing project on Westown Prky stopped me.  it looked like fresh concrete so I went around it and then went through the parking lot of Valley West Mall to avoid further construction.  It was merely scored concrete in preparation for asphalt overlay.  The powder mixed with rain and made it appear like wet cement.  Did not need that crap on the bike anyway.

Thursday morning was the rain ride.  I prepared by bringing an extra set of clothes to wear on the ride home.  Sure, the rain jacket protects the torso form rain but does not protect the shorts, socks and sandals.  No need to stop for groceries so carrying wet biking clothes and used work clothing home was not an issue.  The Tinnely shorts did dry but the pair of shorts I wore over them were still damp.  Fresh shirt, socks and shorts felt good.

Friday a cloud dropped on us.  1/8th mile visibility.  Almost better to ride the trail without front lights since all they really did was illuminate the water droplets suspended in the air.  Deer, who normally betray their location by their reflective eyes were almost totally invisible.  That worried me the most.  Cars have lights and thus can be seen.  Deer just appeared out of nowhere.  Sunrise is earlier and earlier this time of year which helped.  But once the sun was up it seemed like the fog was worse.  Darkness covers the extent of the fog.

After work the fog went away and the rain returned.  I took a different way home, opting for the Jordan Creek Trail instead of the Clive Greenbelt.  It was announced a week or two ago that the JCT was open and that the 3 year closure at I-35 was over.  Wrongo boyo!  First of all, where I normally get on at 60th St workers were busy resurfacing or something on the trail at that point.  No "trail closed" sign.  I continured south and hung a left on the sidewalk that would intercept the trail.  Then at I-35 the big orange and white "trail closed" sign appeared as well as an accompanying wire fence.  No one was working on the trail.  Poles were in place awaiting the reset of  the fencing and the new concrete surface was covered with dirt clods.  I was able to get around the sign and wire fence without dismounting the bike.  Further down the trail I encountered a runner who said, "it's been closed forever!"  Not happy either.

A quick stop at Grand Ave Hy Vee for chicken and vodka was next.  No chicken but they had the Pearl cucumber and plum vodka that Windsor Heights did not have.  Hence, the reason for the trail switch.  Back on the trail with a menacing sky.  The rain would hit soon.

I met a man named Mike who rides a screw and glue Trek carbon, 2120, of the same vintage as two of mine so we talked and rode together to Mullets.  He was aware of the bald eagles nest on the JCT and I informed him of another he was not aware of.  He lives near Zombie Burger and has a 2.5 mile commute so he has to add miles to get a ride in.  Then the rain hit.  Gentle but annoying.

And then I saw Mel Allison, notorious vodka thief, so I kept on going as it was wet.  Just kidding.  If my brain was working I would have stopped her and opened a bottle.  I am poor with names and recognition sometime.  She would confirm it was her indeed and admitted that she was worried about the rain but then remembered that I ride in this shit all the time and found some strength in that.  hate to tell her but snow is better for biking than rain IMHO.

Home at last wet and safe but needed to venture out once more for ginger beer, a lime and a pizza.  I finally put on the rain jacket and rode to Court Ave Brewing Co for a growler of ginger beer.  No seats available but I was in and out within 3 minutes.  Then to Scornovaccas for the pizza.  They were packed.  the fact that I was placed on hold and hung up after wasting minutes should have told me that.  But I got through and the pizza was ready in the time as promised.  I placed it in a hy Vee hot/cold bag and strapped in on back of the bike.  The rain was over and Mary just got home.  Eat, drink and be with Mary.  Work week over!
Posted by CHE at 8:03 AM No comments: 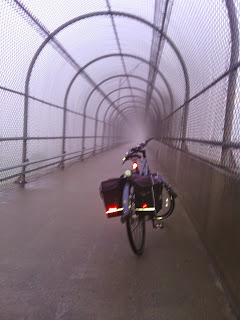 Someone dropped a cloud on Iowa overnight.  We wore as much reflective clothing as we could stomach and rolled into said cloud.  Mary followed my suggestion of turning off her headlamp and using the handlebar light only.  Having quite a lot of experience in these conditions all headlamps do is reflect the water vapor back to the eyes.  From my handlebar light I could see every water particle in front of the beam.  I made the mistake of sticking my hand in front of the light and nearly blinded myself.


Rounding the curve from Gray's Lake to the GL Bypass I noted that for the first time I was unable to see the Fleur Viaduct just over 1/2 mile away.  Gone.  Cloaked by the fog.  Everything was obscured by the cloud.


Rolling on into Water Works on the Bill Riley Trail the deer were nearly invisible as well.  I saw one to my left and instinctively turned my head to the right to look for others.  None to be seen.  Great.  Going to get killed by Bambi.


Joe Ayers was not seen but we left late.  To other bikes and a man walking a dog were out but the couple who walk their dogs on the other side of 63rd were missing.  We probably late at that point.  They were out in the rain the day before, umbrellas and leashes.  Then the tall guy with the BRIGHT headlamp rolled past.  At least he said hello while blinding us. 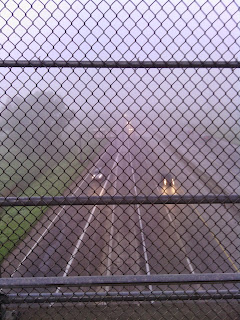 After 8 miles it was time to part ways and take the streets.  I switched the front light to flash since a flashing light attracts more attention than a solid beam.  I was glad to have my eFlare.  The HZ530 with its amber and white strobe mounted on back of the bike may be a bit overkill but it made me feel secure on the streets.  My red flashes were on as well.  I saw another bike at the intersection of 42nd and Westown Pkwy.  We acknowledged each other and I wished him luck.  Daylight was coming and that made the fog seem worse.


I did something I have not done since winter and that was only once.  I took the sidepath at 50th to get over the freeway instead of taking the road.  A small concession to cars but on this day with limited visibility it was the safest option.  I stopped taking the sidepath because it does pose a greater risk of collision.  I have to cut over to the left and get on the sidewalk.  This provides cars two opportunities to right hook me.  And then once over the freeway I have to cross 4 lanes of traffic to get into the driveway of my employer.  I stopped for photos today. 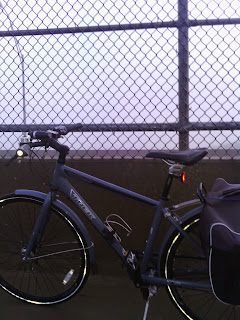 Made it there alive and unscathed.  I imagine there were a few fender benders in Des Moines from idiots who should not be driving.  But they missed me.