We placed our time off requests in 6 or 7 months ago and never rescinded them.  Ragbrai or not we were going to ride.  Mary's Heroes always ride in late July.  And generally we do not ride on the Ragbrai route but ride the same week just start a few days earlier.  Then the Novel Covid-19 Pandemic hit and Ragbrai was cancelled.  But we were determined to ride.  For me it was going to be my last full week of my covid induced sabbatical, I was furloughed then laid off but I'd be working a new job before the month ended.
Head west, Heroes, head west!  Sunday we would meet on the T-Bone Trail just north of Atlantic, IA, and ride to Audubon, IA, before turning around.  Then we loaded up and drove to Shenandoah, IA, for two days on the Wabash Trace Trail.  We took lightly packed touring bicycles and stayed two nights at the Shenandoah Inn & Suites.
Day 1 The T-Bone Trail 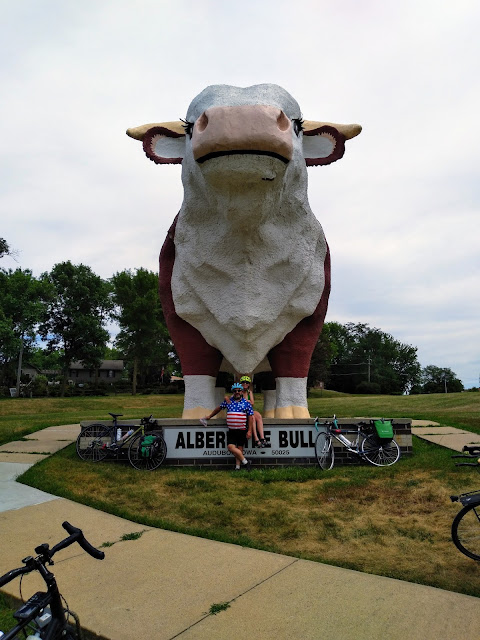 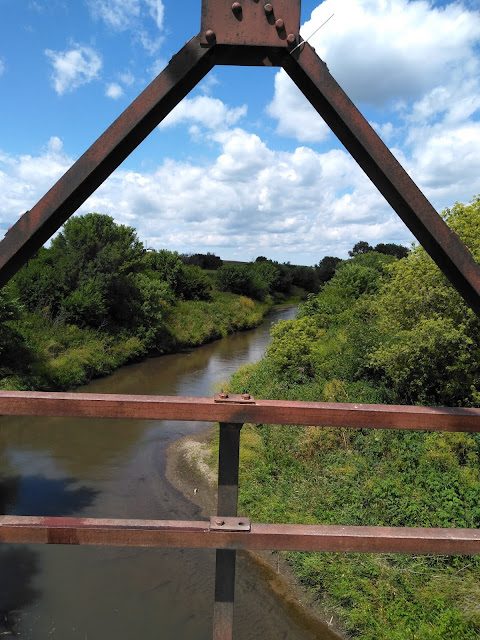 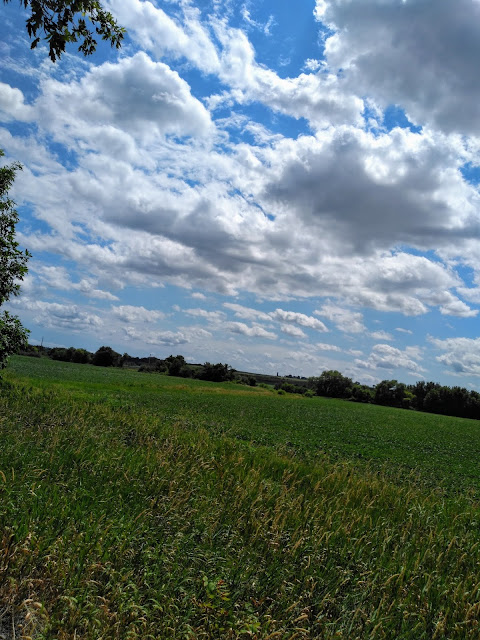 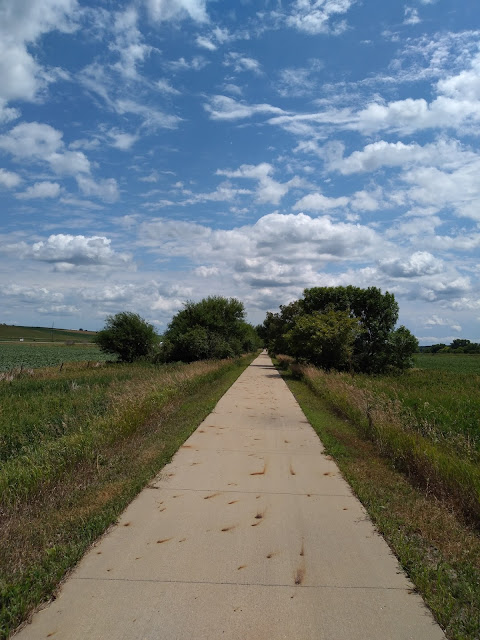 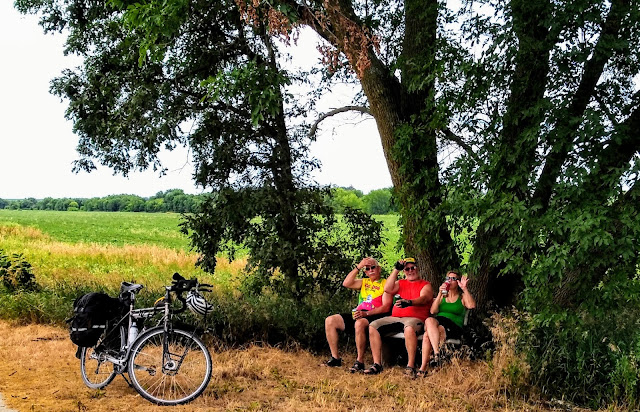 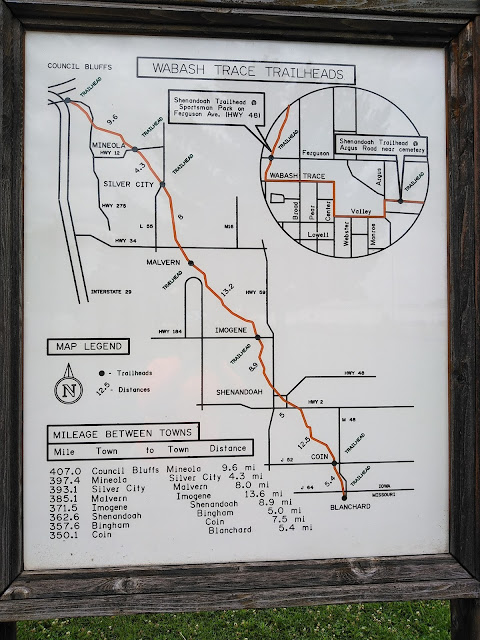 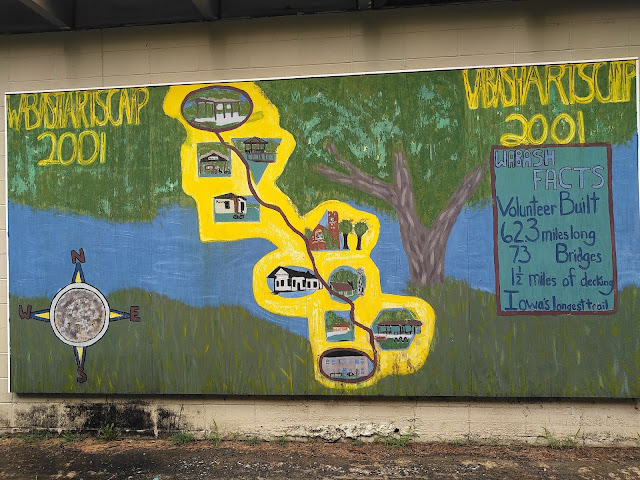 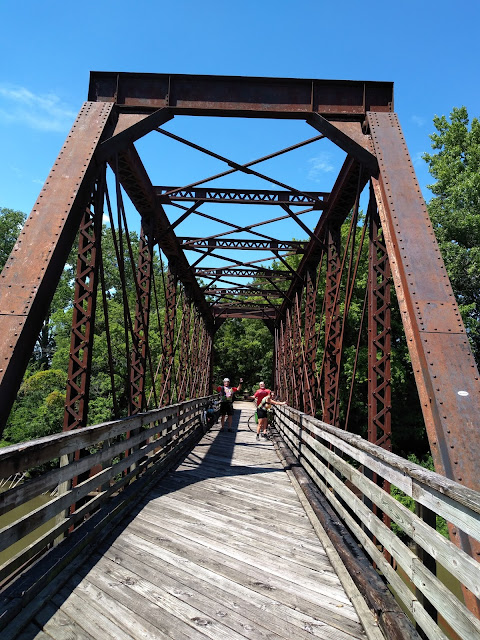 As predicted, it rained over night and we experienced a thunderstorm about the time we would have liked to been riding.  Looking at the weather on the local news it seemed like by 10 am we'd be safe for riding.  I think we finally started at 930 am after a trip to Wal Mart and take out breakfast from McDonalds.  It was 66*F when we rolled out.  But within 3 miles we stopped and removed our warmth layers.  Humidity.  A little later I stopped to let air out of my tires.  The trail surface is crushed limestone.  The rain made it very soft.  Our speed varied between 8 mph to 20 mph depending on the surface and if we were going up or downhill.  Rail grade but changes in grade affect speed greater on soft surfaces.  Prospects of a long ride.
We rode north toward Council Bluffs on our first day because we had all day to explore the towns and their offerings.  The second day we would head south and do the only thing that one can do on this section, ride across the State Line into Missouri.  There is nothing in the towns along this part.  So Silver City was the target of the day.
It was slow going as mentioned before.  A beautiful trail but a slow hard ride.  None of us had the proper tires.  Needed wide and low pressure.  I missed the touring tandem with its MTB tires.  Alas, you ride the bike you brought and not the one you left at home.  Then a light bulb went off: buy an extra set of wheels and have the wide mud tires on them.  Too late.  At least it never rained on us although at times it looked like it may have.  Imogene was the first town.  The bar, Emerald City, was closed. Roll on to Malvern, IA.
This trail has....lost my thought as those three words were written weeks ago and I have just returned to send this miserable write up on its way.
It is the day Ragbrai was supposed to have started.  We are on the western part of the state.  Thousands of cyclists in Iowa have no obligation this week because they were hoping Ragbrai was going to happen.  Yet we see 6 others on bikes on this trail.  4 were a family.  The remaining two were together on touring bikes.  We saw the latter two again on way back.  They commented that we were the only people they saw.  Maybe the rainy weather kept everyone at home. 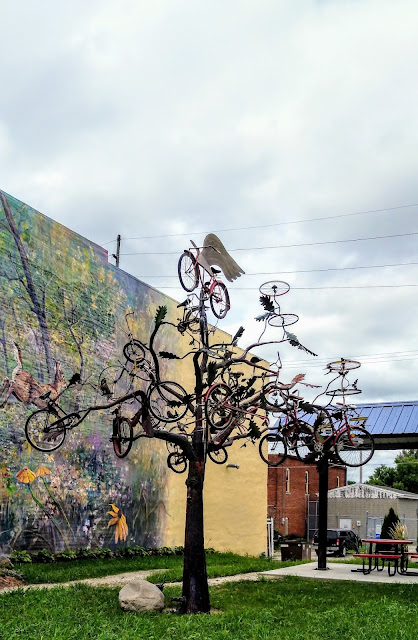 We had lunch in Malvern at a café on the main drag.  Had to eat outside due to the covid.  But the rain was done and it was not terribly humid or hot.  Despite the lack of cyclists the town is covered with bicycle art.  The trailhead has a huge bicycle and in an empty space on the main road there is a beautiful mural and sculpture made from bicycles. Later we find a tractor that is holding several kids bikes as some sort of art project.
We decide to turn around here and abandon any thoughts of going to Silver City.  Slow trail plus a beer stop every 5 miles and the need to secure dinner before 7 pm strikes and the restaurants lock up take priority.  One or two bridge stops and another go at the bar in Imogene.  We discover a shower stop in Imogene.  An old corn crib is on a concrete surface with two showers and toilets and electricity. Good for bicycle camping.  But again the bar was closed so we drank our own. Monday is a slow day in this part of Iowa.
Back in Shenandoah we discover that the Depot brewery is open until 9 pm and is serving dinner.  We have time to shower before we eat.  We are covered in mud from the trail and sweaty.  After dinner we walk to a nearby bar but it is closed.  Monday and covid. 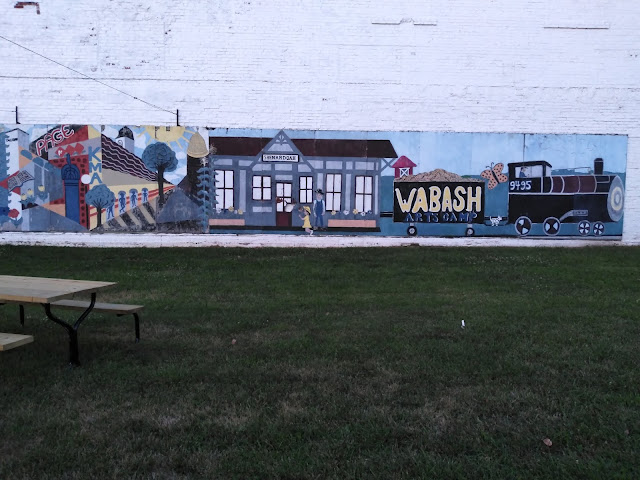 Tuesday morning it was raining and the radar looked nasty.  We packed it in and headed home.  At least we had two days of riding together.  No flats or injuries although my chain was in bad need of Tri-Flow.  The Great Covid Rides of Isolation came to an end.  Once what was fun and exciting faded out to mud and disappointment.  Yet looking at the photos I smiled.  I had a great time.  We stopped at the T-Bone Trail to see if the kitten was still there.  We did not find it.  We would have taken it home.  Always next year.
Posted by CHE at 8:03 PM 2 comments: