40 Miler To Polk City and the Neal Smith Trail 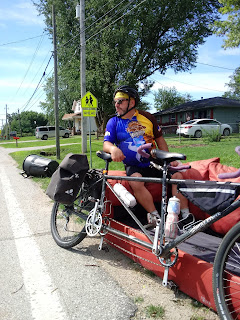 One of those post- Ragbrai rides where we search for a place we have not ridden to X times this year.  Really been craving some Chichaqua Trail but there was a large organized ride on it and we rode part of it last week.  Anywhere but the Great Western Trail On The Weekend is Mary's motto given how busy that path is.  Polk City.  North and we have not been that way for almost a year.  Polk City has great bicycling amenities such as pizza, beer and coffee.  Generally a 40+ mile trip from our home.  20 up and 20 back.

It was such a wonderful day!  The temperature was in the 70s and the humidity was low.  A breeze from the south pushed us north.  It was difficult to remember that it was August in Iowa.  Perfect weather!!!  Seems that our spring was stolen by rain and hot weather early.  We were entitled to this break!

Our route was our well worn route.  Ride to the High Trestle Trail via roads north of Birdland Marina.  This eliminates the out of way curves, bumps and detours of the Neal Smith Trail.  Straight north from Birdland.  Take a left after the cemetery and a right at the bottom of the hill.  Stop at the Casey's in Saylorville if necessary and try to pet the orange cat.  Then follow NW 6th Dr to NW 16th St in Ankeny.  The Git n Go marks the spot.  Shoot up the side path on Irvinedale Dr until it intersects with the HTT (a little street action required at the very end BUT they are extending the sidepath to the trail).  5 miles to the Oasis and hang a left at the county road and two or so miles later lock the bike(s) up at Fender's Brewpub.

Mary was and still on the mend from her fractured rib incident so we decided to take the touring tandem.  Last week's expedition on her touring bike was rough as the reach was a bit too much for her injury.  As a stoker on the Fisher she has less of a reach, does not require much upper body strength and can sit up and ride one handed if needed.  That tandem is our touring tandem and thus was fitted with panniers and wide tires for a smoother ride.  Interesting to note that we rode this same bicycle to Polk City 10 months earlier, our last visit to that town.  ALSO should note that this was the second time we rode the Fisher this year.  I was a little shocked to see that it only had 7 miles on it for the year!  Consultation with the Bike Log was necessary to confirm this.  Sure enough the only outing of it was at this beginning of this month as Mary made her first ride since cracking her ribs a month prior.

First we needed breakfast and spare tubes.  I really am not a fan of riding on an empty stomach and without a spare tube or two.  Freds did not open until 10 am which gave us time to grab a bite at Fuzzy Tacos and a coffee at DSM Brew.  Back to Freds and purchased two tubes.  I felt safe!

Obstacle 1 and 2. Since it was Saturday and The Farmers Market was in full swing we had to ride to 4th St to get to the NST.  And since it was a Saturday in Des Moines some sort of "Run" was on but there was a police officer controlling the intersection so we could cross without upsetting athletes.  I believe it was the Walk To End Alzheimer's but I do not remember.  Safely across we were able to get to the trail and head north.  I guess Obstacle 3 was involved.  Never ending construction makes the Principal River Walk worthless.

We left the trail at Birdland and took Penn/Saylor Rd to Cornell and rode it all the was north until we encountered the T intersection at NE 60th Ave along the Highland Memory Gardens cemetery and took a left.  Now there is a traffic light at NW 60th and Highway 415 (2nd Ave) which makes it safer.  We used to play Frogger here.  Cross and go down the hill to NW 6th Dr and turn right, climb the hill and enter Saylorville home of a Casey's General Store and Sonny's Pizza Bistro a place we always look at and say that we need to visit.  One day we will.  Keep heading north and at the stop sign turn right.  This is NW 16th St.  At the stop sign turn right again and a Git N Go convenience store is available for your needs.  More importantly, access for the Irvinedale Dr sidepath is here.  We take this to almost where it intersects with the HTT.

NOTE.  For SEVERAL years Irvinedale has been closed for storm sewer repairs/maintenance and we were forced to detour.  Today it was OPEN.  This route saves a lot of time and avoids the Oralabor Trail and crossing Oralabor Rd and the BS required to get to the HTT.  We were very pleased.  HOWEVER, the Irvinedale Dr sidepath starts on the west side of the road and takes a tunnel to get to the east side.  CURRENTLY they are working on that tunnel near the water tower and we had to cross the road and ride through grass (OK because we had wide off road tires on) SO if you plan to take this route get to the east side of the road at the Westwinds Park at SW Woodbury Lane/SW Prairie trail Pkwy or just ride the damn road, it is not that busy.

QUICK REMAINING RIDE  The sidepath ends at NW 18th BUT they are extending the trail.  Work on the sidepath is very visible and should take about a month at Lowest Bidder Speed (3 months) to complete.  Although one could hang a right and go a few blocks over to intercept the HTT and STILL have to cross Irvinedale Dr just to continue on the HTT we just get on the road at NW 18th and go the block or so and turn left on the trail proper.  5 miles later the Oasis appears and the road to Polk City.

Once again we went to Fender's for beer and ordered a pizza from Papa's Pizzeria next door.  The beer and pizza were delicious.  We watched Premier League Football, Liverpool beat Arsenal 3-1.

Instead of retracing our ride we opted to take the Neal Smith Trail home.  We have not been on this trail this far north in years.  The roads are smoother and faster and in many ways safer.  We headed straight to the trail on S 3rd St choosing not to follow the Bike Route in Polk City since it is out of the way and hilly.  They have improved the shoulder along 415 just past the intersection that has the Casey's and car wash and automotive store.

This section of the NST is curvy and dangerous and do I dare say a bit dull?  While the curves are fun at speed the risk of collision is probably higher than getting hit by a motor vehicle if we took the roads home.  Example.  Nearing the Butterfly Garden there was a person walking on the trail reading a large book.  True this person was on the right side of the trail BUT behind were three bicycles going equally as fast as we were.  The curves and trees hid our presence from them and our presence from them.  Of course everyone was perfectly timed and lined up to meet where the literally giant was walking on the trail.  No real time to brake.  Despite our mass I elected to put the 2.1" off road tires to use and took the grass to prevent pain and suffering especially for Mary and her ribs.  We have never experience such a dangerous situation on the streets to and from Ankeny.

Afterwards there was the final downhill coming off the dam and one pedestrian to avoid and then pedal pedal pedal pedal pedal pedal.  We rode on the the section of trail that parallels I-80 not knowing that it will soon be closed for 2 years.  I hope they repave this section.  It has been rather rough for 20 years.

I like to joke that I ride the entire NST once a decade.  That is a true statement.  Hate to admit this but personally I have little use for it.  We would like to see the flowers at the end of summer at the prairie but we'll have to see what detour they create.  Taking the road is so much easier and fast and safer.

Back On The Saddle Again With Mary


It has been almost a month since Mary slipped on gravel while attempting to get on her bicycle.  A month with two fractured ribs.  A month of pain, issues sleeping, lifting things and a month without riding. A month of stir crazy.  It was her idea to try to ride the tandem.  The tandem reduces her workload and thus theoretically easier on the torso i.e. rib cage.

So we dug the touring tandem out of storage, brushed the cobwebs off and aired the tires.  As a finishing touch we added a new set of panniers to it so it would not look so emaciated.  Simply route around Gray's Lake to look at the new pedestrian bridge spanning the Raccoon River to the new development.  Then downtown for lunch.

I tried my best to communicate.  Let her know when I was going to stop pedaling, stop and to call out bumps.  No complaints but I'm bad about this.  After nearly 30 years of captaining tandems there are two skills I still have yet to master.  Communication is one.  Bunny hopping is the other.

Mary survived.  Bumps were the worst as they jarred us.  Maybe a dual suspension tandem....  She rode with one hand because using her left would have added pressure to her damaged/repairing rib cage.  I suggested that we adjust the stoker bars but failed to bring that tool along.  Plus those bars are a bit narrow and my bum would be in the way she said.

We took the long way home electing to ride from the school at the end of our road to our house.  After the final turn Mary said i should have put more air in the tires.  I tried to look down at the rear tire but being a tandem the captain has no easy view of the back.  One nano second after she mentioned air a man said "Hey you got a flat tire.  I can fill that for you."  I knew it was long past airing.  Our home was in sight anyway.  We thanked him for the offer but said we are almost home..  Time to walk.

Yep, totally flat.  That tire had less than 60 miles on it. We bought them for a gravel road tour last October.  First ride since them.  Exactly 50 miles on them before we started today.  Once home I never found the trouble maker.  But given the urban environment we rode on today I am not surprised the tire lost all its air.  We are glad that we were almost home when it gave up the ghost.