A Wonder Ride in Winter


Christmas is next week.  2020 is coming to an end.  Not soon enough for most of us but I hate to say this but 2021 is not going to be an automatic improvement.  I'm still riding.  27*F and I have returned to riding the Single Speed after Saturday's snow put me on the Winter Bike for most of the week.

It was a simple short ride.  One and a half miles to Hy Vee for ice cream and booze.  I have no idea what to get my adult except stupid whiskey sets with glasses or Christmas ornaments.  Seems appropriate as the world could literally end tomorrow.  Chocolate ice cream for Mary and I and half and half for my coffee.  Simple pleasures.  Take the long way home via the wonderful trail system of Des Moines.  MLK sidepath to Gray's Lake Station and then around Gray's Lake itself.

Gray's Lake Station was wonderful tonight.  A light fog engulfed the new residential neighborhood and trail.  Really made me appreciate what a wonderful city I live in.  The closer I got to the lake itself I could hear the sound of air being sucked into jet engines, mixed with glorified kerosene, compressed and ignited and blown out the  rear of turbo engines.  Someone is going somewhere while I ride my bicycle on an asphalt ribbon between fields of snow.  Tonight all the lights are on.

I am a little disappointed that the lights on the Rainbow Bridge are covered by the snow the plow pushed to the side.  Tonight they are green but one needs to be on the bridge to see them.  Yeah, I need to bring a shovel.... 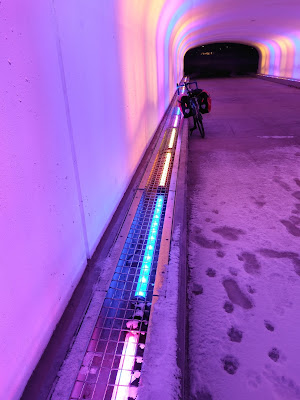 But from that bridge I saw something spectacular.  A pink glow from the tunnel connecting the lake park to Water Works Park.  The lights of the tunnel have been dark for about a week or so.  I thought it was from the original issue of the wrong solar charging system initially installed when the tunnel was completed.  Nope.  The same lights used on the bridge are now operating in the tunnel.  I stop for a few photos and then continue my journey home.  Although it is below freezing it is not cold enough for ice cream.  The bridge that crosses the lake is another beautiful sight at night.

The people of Des Moines are very fortunate to live here.  Other cities may have better infrastructure for commuting but we have the ability to disappear for the ugliness of urban environments.  Even in winter.
Posted by CHE at 8:37 PM 5 comments:

Foggy Notion To Ride To Redfield


Forecast was to be near 40*F sunny and dry.  It's my Monday off from work.  Time to add some miles to this last month of 2020, Covid be damned.  So I picked the section of the Raccoon River Valley Trail (RRVT) that I have not done this year due to construction.  Waukee to Redfield.  This year the caretakers of the RRVT have had this 17 mile section closed for construction on the many bridges between Adel and Redfield, 8.5 miles according to signage.  Work has been completed and I desired to ride somewhere I have not been a million times this year.  Load up the CR-V and roll!

It was 30*F when I pulled into the trailhead in Waukee.  I could have ridden from home but I did not want to make this a 70+ mile day plus risk my life on the sidepath along Hickman Rd in Waukee.  Junk miles.  It was also foggy.  When I left Des Moines the radio said it was foggy but I did not encounter the fog until I was near Waukee.  The weather people said that this fog would burn off and the sun would be out.  Good thing I brought lights.

After I rolled past Adel, 7.7 miles according to signage, I saw the fruits of the construction.  The wooden railings on the bridges were replaced with black metal railings from Des Moines Steel Fence Co.  These are the same as those along the High Trestle Trail.  Also, a lot of the that 8.5 miles had been resurfaced.  It needed it.  Now they can focus on repaving Yale to the bridge outside Jefferson.  Hint, hint!  This has always been my favorite trail and sooner or later the bumpy sections are resurfaced.  Thus pay for your permit as the money is needed and used appropriately.

The sun also came out as I left Adel for Redfield.  And it was getting warmer by the time that town was reached.  Took a photo and left.  There had been a few other trail users between these two towns.  Walkers no cyclists.  The pedestrian in Redfield was walking two dogs.  After turning around and encountering her a second time I had to shout at the top of my lungs to get her attention as she and her dogs took up the entire width of the trail and she was talking to someone on the phone about a person with a drinking problem.  My previous attempts to get her attention fell on deaf ears, literally!

Back in Adel I stopped at the Morning  Grind coffee shop.  Although it opened in May of this year we, Mary and I, only recently discovered it.  We planned to ride there on Sunday but those plans fell through.  My usual was ordered, 3 shots of espresso over ice and fill the rest with half and half.  The barista understood my weird request and made it perfectly,  $2 tip.  I drank it outside in the Sun's warmth.  Then back on the saddle for the last 7+ miles.
After crossing the bridge over the Raccoon River, recently adorned with lights but not on during daylight, there is a 3 mile climb out of the Raccoon River valley.  I needed to climb to warmup again.  Funny thing is that when I reached the summit at Ortonville it was foggy again!  And colder!  My phone said it was 37*F in Adel but when I got back to the Honda it was 34*F and in Des Moines it was misty.  Finally reached for the water bottle to take a drink of water.  Icy spout!  At least I had some sunlight earlier in the ride.

Other cyclists?  Just on heading west on a fatbike just before I got to Ortonville.  Usually I see more bikers on this trail unless it is a late night ride.

Take advantage of these days in the 30's.  Soon it will be real, real cold.