That time of year again.  Day light becomes a scarce commodity.  Evil North west Wind hits hard.  Winter will be here soon with in 20 below zerex temps.  Cities release the last of their coffers to tear up streets and trails.  Yeah, that last one.


Clive is repairing, repaving and rerouting the Greenbelt Trail.  Yes it is a necessary pill to swallow.  From about 108th to 114th.  The trail surface was very busted up around a very curvy area.  Some of the curves are blind which adds another element of danger.  A funny thing about this is that the closure is not addressing the dangerous rail road crossing nor the section of trail that was washed out by Walnut Creek.  The latter is being address and will be easy to avoid.


The Greenbelt is an important route to my employment.  I ride it to and fro work everyday.  In the morning I can take streets if the trail is closed or incapacitated for some other reason--flood, too much snow and ice ect--but said streets are rather busy after work.Work was scheduled to begin on Monday October 9th.  I rode the trail to work but took a different route home.  The Jordan Creek Trail is the alternative trail home.  But it is slightly longer and feels slightly slower and appears to be somewhat out of the way.  JCT is not plowed during winter and its tunnels, heaven forbid if we allowed to go over the streets to cross an intersection, are quite susceptible to flooding and mud after rain.


I met Jane on the trail Wednesday and we discussed the situation.  She told me of the long awaited detour that was to be posted and also said that the trail is slated to reopen in the Spring.  Damn, that's a long time from now.  The detour is feasible, trail users must use neighborhood access trails and streets to get around the construction.  I worry that said trail sections will not be plowed.  Sure Chris, just take your fatbike.  Nope, the trail gets cratered and icy from walkers ect and the surface becomes a slow miserable and dangerous experience for all until it is plowed or the sun melts it.

Ingersoll Ave holds a major bicycle lane in Des Moines.  I sometimes take these lanes when the Bill Riley Trail is flood which is often and happens in winter as well.  I also have taken Ingersoll when there is too much snow on the trail or there is construction such as the replacement of the rail bridge.  I drove on Ingersoll yesterday.  I do not want to drive or bicycle on that avenue again until construction is complete.  They have take two lanes out, the bike lane and the sidewalk out on the north side for several blocks.  Where will it end????

Don't get me wrong, I am grateful that the municipalities that I ride through fix their infrastructure but at times it seems a bit overwhelming.
Posted by CHE at 6:38 AM 1 comment: 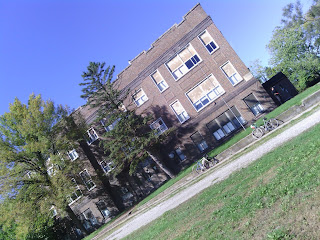 It was a few weeks ago or perhaps a month ago that an article about a haunted school appeared in whatever online news feed I was using.  The lost article said that the school closed in 2002 and in 2006 new owners tried to renovate the place and just gave up because the place was haunted.  Someone told me that their friend did some electrical/mechanical/carpentry work there and saw his tools move.  Since it was in Polk County, Iowa, the county that I live in and located not far off from a wonderful bicycle trail I frequent I had no choice but to organize a ride out to said haunted school and play Scooby Doo.  Of course, due to real life commitments, traveling to Chicago and LA in the name of Rock & Roll delayed the ride.  I also failed to properly organize the trip.


Brad was down right gung ho on this trip.  "Let's camp there!"  Tried to get others.  Shane took a bite but a day's notice was not sufficient.  Rob said NO WAY, avoid evil stuff!  Craig and Kim were out of town and Mary had to deal with our daughters.   I just wanted a quick recon, some spine tingling chills and GTFO to nearby brewery in Bondurant, Iowa.  No need to really become terrified.  Definitely carry a Rosary and some Holy Water just in case.  Perhaps go to Reconciliation before hand to get my sins forgiven so I can be clean when I roll onto this haunted turf.  After all there is a spirit here labeled "not nice."  Paranormal Activities at Farrar School

Brad and met last week when I dropped my daughter's bike off at his shop, Fred's Bikes, for a new BB.  Asked me if I still wanted to ride there.  Since we both had Sunday free we agreed to meet and ride to the school.  The plan was simple.  Meet and take the MLK Trail to E 25th, cut up to Scott Ave and ride to the trailhead of the Gay Lea Wilson Trail and roll all the way to Altoona.  Exit Altoona on its northeast corner and enjoy the wonderful county road to the trailhead of the Chichaqua Trail.  Follow the trail to 112th and turn north and ride all the way to Farrar, Iowa. 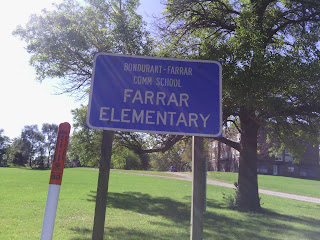 So this morning Brad and I met at 8 am and rode our road bikes to the school.  What I thought would be a 50 mile round trip turn into a 70 miler for me and perhaps a 76 miler for Brad. Yes, poach a ride on the new trail north of Altoona, turn off to early from the Chichaqua Trail and have to double back, take the long way back to Bondurant since Brad drove it the other week and it was "just off the turn", take the long way home from Bondurant (the extension of the Chichaqua Trail to Berwick, Iowa and the Four Mile Creek Trail) since Brad has never had the opportunity to ride on it.  But it was all good since we ride well together and the conversation is great. 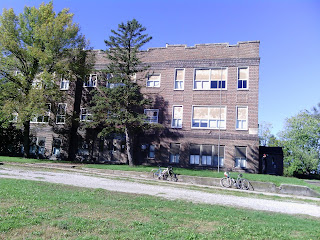 Before reaching the school we encountered a crop duster spraying the now brown corn field south of Farrar.  Why is he spraying we wondered?  Perhaps an anti fungal agent since the corn is ready for harvest but recent rains make that impossible.  Too late in the season for insecticide.  Weird.  The pilot did fly over us rather low when we entered the school grounds. 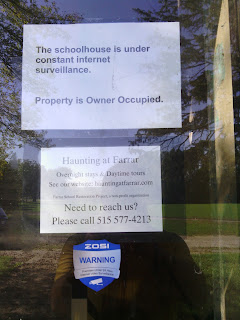 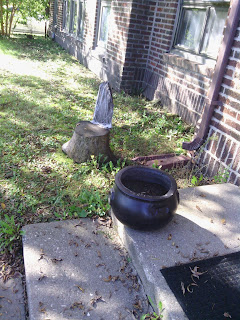 Nothing out of the ordinary at the school.  An old brick building with two vehicles parked out front.  Brad noted that the blue SUV was in the same exact location from his previous look.  A stump with fake spider webs on it and a black cauldron.  Peaking into the window we could tell that the owners were preparing for a "haunted house" Halloween event.  Signs on the window indicated that tours and overnights were available.  A website was given.  And yes, we were being watched by cameras and internet.

We searched for unlocked doors and only found one but it was a dead end since the inner door was locked.  So we just walked around the building looking for something.  The only thing we found were tiny black gnat like or flea like insects that bit us fiercely.  Brad called them poltergeist flies.  They were awful.  They were not around when we first got there.  After a moment we left and explored the cemetery across the street.  It should be noted that the bug bites stopped when we crossed the road.  Perhaps the crop duster chased them to the school.  Perhaps they were from the cattle next to the school.


I'm glad we did not camp there since we would have been eaten alive by the bugs.  But a night ride would be interesting.  If you would like a serious tour without a long bicycle ride click here: Haunting at Farrar

BLOGGER'S NOTE: An explanation of the crop duster is that the plane may have been planting a cover crop on the cornfield.
Posted by CHE at 3:26 PM No comments: