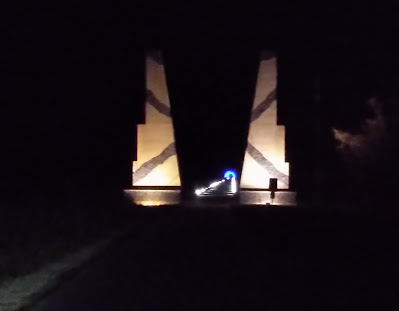 9 days into October and we did something we had not done this year.  We camped and slept in tents.  2020 killed our camping bicycling adventures.  Early on parks were closed and when they reopened only those with RVs (self propelled toilets) were allowed in because restrooms and showers were closed due to the Covid-19 pandemic.  We opted to stay in motels for our adventures in June and July.  August and September we based our rides from home or drove to the trailheads.  But the weather forecast for the weekend of October 9-11 looked great and offered the last chance to enjoy the 80s.  Make a plan.

Sent a text out to some friends and suggested that we DRIVE to Swede Point Park near the High Trestle and set up camp.  We would be able to enjoy the High Trestle Trail from there.  Donnie took the bait.  Good thing he did as he was able to get to Swede Point and secure a campsite before we got there.  He was able to get the LAST spot, the youth area, which was perfect as it was secluded from the other campers.  We had two tables and a fire pit with 3 log benches around it.  The place was packed!  Lots of people having the same idea of escaping the city.  Saturday evening the clubhouse was the site of a wedding reception.  Despite the campground being at capacity we did not have to wait to take showers or use the restroom.  Nor was the place noisy.

I'd like to mention that many people brought their bicycles.  Among the campers were two that slept in a van but kept their Salsa and other nice adventure bike outside.  Donnie recognized one as a former boiler inspector.  Their plan was to ride to Cambridge and watch the ISU football game from the bar there.  True Iowa cyclists!

This adventure was the first opportunity to use our new MSR Hike-Thru tent.  It worked perfectly.  The first night I left the rain fly/wing off and slept with the stars in view as the tent's walls are all mesh. The weather was also great as there was no dew so our tents and bikes remained dry. No need to wipe bars and saddles off or set the tent up at home to dry after we returned.  And the stars.  Since it was autumn leaves were falling and at night it sounded like rain but when I opened my eyes I saw a clear sky and billions of stars.  Donnie brought a Weber grill and I brought sausage and buns for our first meal.  Baked potatoes as a side.

Mary brought her Bianchi Volpe.  I took my Verenti Substance.  Both there bicycles have panniers.  Donnie rode his Surly Straggler with rear panniers.  All three bikes could handle paved and crushed limestone trails and gravel roads.  Mine especially after I reinstalled its original WTB Riddler tires.

Friday after setting up and eating dinner we rode to the High Trestle to enjoy it's blue lights at night.  This was one of the rare occasions that we had the bridge to ourselves!  There were other groups but for our intents and purposes it was empty of humans.  We we extremely social distant!!  It was perhaps 10 pm.

After we had our fill we ventured into Madrid and raided the VFW lounge.  The special was $1 draws so we drank a lot of Busch Light.  I also purchased two face masks to support veterans, one was a Army motif and the other the Navy which I sold to Donnie because it was the last one and he wanted a Navy one.  Needless to say we did not make it the Flat Tire.


Saturday was to be the big day.  My original idea was to ride to Slater and hop on the Heart Of Iowa Trail and take that to Collins and visit my buddy's, Eric Crabb, grave.  It has been a year since his untimely demise.  Friday I buried another friend before leaving for this ride and I was in that emotional mood to pay respects.  BUT that trip was looking to be an 70 to 80 mile feat and I was a bit hung over and Donnie had not been on his bike much since nearly getting killed himself while commuting on a gravel road.  That incident pretty much stopped his riding.  He did say that I could ride that way but I felt the need to spend the day together.  We followed his suggestion.  We rode to Perry.

But first breakfast.  Driving up offered us luxuries that bagging out could not match. Not only a Weber grill and coolers but a gas skillet.  Left over potatoes and sausage mixed with eggs and sausage strips (like bacon) for breakfast.  We travel well.  Besides as our Covid bike rides this year have proven, finding food can be difficult.

I needed coffee. I need to obtain a coffee maker for bicycle camping.  So after breakfast we made the Casey's in Woodward our first stop.  Caffeine intake sated we continued to Bouton and then the gravel roads to Perry.  The worst gravel was the stretch from Bouton to Highway 141.  Not terrible but the worst section of the ride.  Short, fortunately.  After crossing the highway the gravel was fine except for the fact it was harvest season which increased traffic.  I found a great use for those damn masks that we are encouraged to wear for the Cobra pandemic.  They block the dust clouds that automobiles and farm implement make on these roads.  Since mine has a band that keeps it on my neck I can quickly pull it up and place it on correctly with one hand without getting off the bike on a gravel road.  I also slept with it on my neck that night!

Despite the gravel dust clouds and harvest machinery we made it to Perry.  First stop was at the Perry Perk for, you guessed it, more coffee!  This place is a mandatory stop for me IF they are open.  Their 1 pm closing time grinds my gears.  Espresso this time.  3 shots over ice and half and half, my usual.  Donnie had a caramel macchiato (Star Bucks style, not a true macchiato) which was a big step in our corruption of him.  He liked it.  During our June adventure we got him to like hard seltzers.  Mary had her usual, iced vanilla latte.  The next stop was Casa De Oro for lunch.  We eat well when presented with opportunities. 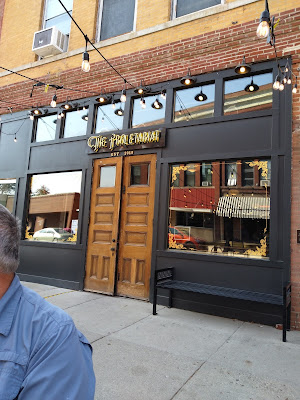 After filling our bellies for a second time why not relax and enjoy a beer at the bar next door, The Proletariat.  This was our second visit here, the first time was during BRR.  We sat out on the front "patio" and listened to the ISU game.  However, when we were listening the 'Clones were messing up.  I was inside when the touch down was called back only to be replayed as a pick 6 for Texas Tech.  We left about half time.

The Rusty Sprocket in Bouton was our next destination.  Sadly, this place was empty.  Placing all his hopes in a bicycle crowd that did not turn up that day.  Maybe they did at night.  Oh well, it's Covid Time, practice social distancing!  Here the Cyclones were playing better and beat the tar out of Texas Tech.  We inquired about the trail connection from Perry to Woodward, the missing link from the High Trestle trail to the Raccoon River Valley Nature Trail.  He said that to take the second road out of Bouton and do 100 yards of gravel that we would find the trail.  Sure enough we found it but that second road seemed miles away from the bar and the 100 yards seemed like 3/4 of a mile.

The trail was nice.  Paved and secluded from traffic as it is between two farm fields.  Places for benches cleared out.  And as we reached Woodward it stopped.  Options to take a gravel road north or south to get into town proper.  OR  ride down a steep embankment and across a soccer field and disappear into brush to emerge in a choice of two peoples' yards before emerging on a paved street in Woodward.  Donnie chose the third option not knowing about riding through someone's lawn.  We followed.  Apologies.

The desire for a post ride cocktail had me searching for a bag of ice.  Since Casey's was now out of the way thanks to the new trail I stopped at A J's Grocery since it was close and a Messerschmitt ice box was out front.  But the owner said that a wedding party bought him out of all his ice.  But I bought tonic instead, 2 Cokes and 2 ginger ales and some Gatorade before heading south to Casey's for ice.  They were not sold out.  Donnie and Mary head to camp while I made the ice run.  Donnie needed to get the grill going.

It was not dark yet and the bridge was getting crowded.  I turned on my lights anyway and recited "On Your Left" many times until the turn off to Swede Point.  Pulling into the campground I saw many many cars and the tables set up for the ice thieves  err wedding party.  Later that night I was almost disappointed that they were not a loud rowdy group.

The Weber grill was in action and we enjoyed BBQ chicken and potatoes for dinner.  A shower first.  One of those push button water operations.  No one else in the shower house.  Warm water!  Pro-tip: always take a light with you when venturing away from the campsite.  I failed to do this and the trip back was very very dark.  Somehow I did not get lost or walk into anything like other campers' bicycles parked 20 feet away from their camper ect.  I made only one drink, Jack & Coke, before reverting back to beer.  No return trip to the Trestle or bar.  No hangover in the morning.

Sunday morning we packed up and said good bye.  No dew so the tents were packed dry and not needed to be set up at how although we probably should have to clear the dust out.  We decided to have breakfast at the downtown Hy Vee to say hello to our daughter who managed to get to work by 530 am without one of us as chauffer.

Not a high mileage weekend but a relaxing and fun weekend.  Great to get away from the city and work and the news and that damn election.  Hopefully next time we can ride our bikes there and do this self contained.