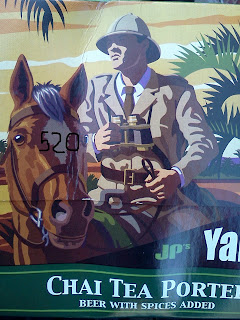 Labor Day in Madrid, Iowa, is always a good time.  For some it is a celebration of working class values.  For others it is the fond farewell to summer.  Still others it is a four day drunk.  For us it is the perfect excuse to ride up from Des Moines and visit the High Trestle area.

Craig planned this trip for a long time.  Leave on Friday after work.  Stay til Monday.  Watch the Iowa game in Perry.  Catch the ISU game in Slater.  Stay at the Trestle Hotel.  A mini-Ragbrai.  BRAIer.  This sounded good to the hedonist biker inside me.  I have not visited the Trestle all year.  Nor have I bagged anywhere since Ragbrai.  This would be a perfect way to end the summer.

But as launch time quickly approached the weather became an issue, it was getting a little warm.  Other doubts filled my head as well.  I really need to stay home and fix bicycles.  I should spend more time with my family.  Fareway has my favorite meat on sale and they will be closed when I return.  The temperature was the main issue.  100F forecasted for Friday.  Never really cools down at night.  This could be dangerous.  I talked Craig down to one overnight plus pack bags for two nights.  If it was good we could linger longer.  By Thursday I was psyched to go.  Work had been crazy.  Release was necessary.  Weather be damned!

The 520s were packed Thursday evening since Friday was a work day.  I added a few new items and arrangements.  I added my seldom used TurboCat flood light for better close up night vision and its judicial battery conservation.  Normally the battery is mounted on the frame and thus steals a water bottle or reduces the size of one bottle.  This time I placed the batter in the front pannier.  awkward to turn it off and on but possible while rolling without much difficulty, just remember to keep the fingers to the right of the spokes.  Also a new portable power supply for recharging my mobile phone and my camera.  Two coolers, one internal and the other on top of the rear rack.  No tent.  Too hot for tent camping.  Mosquitos were nonexistent due to the lack of rain all summer.  Thermarest pad  and light weight LaFuma sleeping bag all I needed.  In the past two Ragbrai's I put the tent up twice.  Did not need the ballast.  Two insulated H2O bottles and a 1 liter Nalgene bottle for back up.

I filled every bottle and cooler with ice as I left work.  First stop was at Barr Bicycle.  Purchase a new kickstand and installed it in the shade.  The former kickstand busted on Ragbrai several years ago.  I had time to kill.  Stopped at Windsor Heights Hy Vee for the purchase of some cool crisp and refreshing beverages for the coolers, 6 of Busch Light and a 6 of JP's Yabba Dhabba Chai Tea Porter.  I wanted Newcastle but they did not have any in cans.  I liked the box anyway.  Seemed fitting.  My shopping also included some batteries and hygienic products that I forgot to pack.  Despite back tracking I needed a time suck as Craig had a few things to do including driving home to fetch his bike. Our rendezvous was in Clive at the University Tap or Pub.  The former TR's has both names listed.  Located on University Ave on the same side of the street and a strip mall away from 515 Brewery, this quaint neighborhood bar has a nice selection of draft beer including Court Avenue Brewery's Pointer Brown Ale and a $2 mystery draft.  $3.75 for the CABCo.  An older crowd but the acoustics were not painful as they are in 515 or Confluence.  Yes, they have Fireball.  We sat out the heat for a half hour.

The Clive Greenbelt trail was our route out of town.  We took it to 128th St and seized a northbound lane.  As Craig put it, "the Lexus SUVs can go around us since there is no sidepath or trail."  I agreed noting that even the BMWs possess adequate horsepower to move around two loaded Trek 520s averaging 12 mph.  No one honked or threw drinks at us.

On top of the hill we noted both bad news and good news.  The good: weather will cool off tonight.  Bad: head wind from the north.  It was refreshing despite slowing us down.  At the Chicken Coop we ditched the road for the sidepath all the way into Grimes. 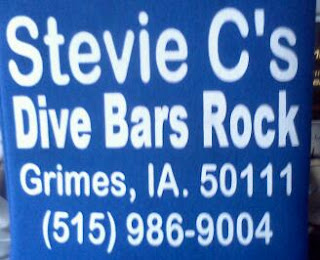 Grimes was the first stop.  Stevie C's.  Craig and Chad discovered this place on the 4th of July.  That is when Craig met the owner Brandon.  Brandon is a ragbrai veteran and would like to form a team based out of the bar.  Nice outdoor lounge in back although too warm to enjoy it.  Spacious bar inside.  I recommend the Garbage Can pizza.  After two pitchers and a Fireball or two we hit the road for Granger.

By the time we hit Granger and stopped at the Casey's General Store I needed Gatorade and no beer.  Craig suggested the local watering hole but knowing better I declined.  Just get to the trail ASAP was my mantra.  But now we faced the BitterSweet Road.  Although I have ridden on this road several times on the bike I was using I was not prepared for the gravel.  Could not find a line to save my life.  The cleanest line was all the way over on the left.  That would be fine if I was in the UK but in 'Merica I was at risk of a head on collision with a car or truck. Fortunately, it was late enough where cars and trucks were very few.

Apologies to Craig, I was a bitch.  The combination of low energy levels, too much beer and 700x28 road tires on a heavy bike were the cause of the issues.  I knew better but did not have time nor the desire to purchase and switch tires.  I gambled and lost.  No flat tires or wipe outs but it was a slugfest on that 8 to 10 mile stretch of gravel.  Thinking back about it, and this thought did cross my mind at the time, this was payback for Ragbrai.  I kicked Craig's ass on every road, hill and downhill.  And he threw a similar fit on the St Charles Rd, G50, on the pavement to the turn to Winterset.  Payback?  No, me bad.

Bittersweet Rd intersects the High Trestle Trail east of Woodward.  Last year we stopped here and had a beer or 3.  This year we merely coasted downhill to the Trestle Hotel.  Stopped at the concierge level and enjoyed the observation deck.  the last of the chai porters were consumed.  My back up Gatorade was chugged and some Busch Light before we went to our First Class suite at the hotel.

The stars were spectacular that night!  All that starlight travel for billions of years to reach us.  Milky Way.  Discussion of the cosmos ensued before shut eye around 3 am.

Sunrise at the Trestle is something everyone should see.  Any schmuck can drive up to Madrid or Slater and ride to the Trestle at night.  But I respect those that ride there from their homes.  More difficult.  But sunrise is Ace Difficulty Level.  The Hotel was peaceful.  Nobody disturbed us.  No cops evicted us.  You open your eyes and there it is.  Summon the strength to get up and operate a camera.  Go to the observation deck and shoot photos.  Walk down to the bridge itself and click away.  It takes real effort to do this.  Much more effort at sunrise than at night if you bike there.  Much more difficult with 3 hours of sleep after starting a ride at 102F and refueling with beer.


The next time I stay at the Hotel Trestle I will have breakfast at Casey's in Madrid.  We entered the Flat Tire Lounge at 830 am.  No food.  Radish starts selling breakfast at 10 am.  Town & Country Cafe was closed since August 24th and slated to reopen on the 4th of September.  Although we could have had cinnamon rolls at the Labor Day celebration we chose to go back to Flat Tire and wait for burritos.  In a nutshell, we killed two hours waiting for breakfast.  Burritos were awesome but we got them 25 minutes after placing the order.


We parted company from here.  Craig was going to Perry to watch the football game.  I wanted to ride home and go to Fareway and be productive.  a shower was needed.  But most of all I missed my beautiful wife.  Let's see if she reads this.  I headed to Slater and stopped at the Oasis for water and a beer before parting the trail for Polk City and the Neal Smith Trail.  This is my favorite way home from the Trestle.  Nothing to note on this section of trail except a group of Boy Scouts were completing their Bicycling Merit Badge, 50 miler in this heat.  Also Polk City or the State wised up and partially paved the shoulder on 415 so one can bike safer to the NST entrance south of Casey's.  I appreciated this. 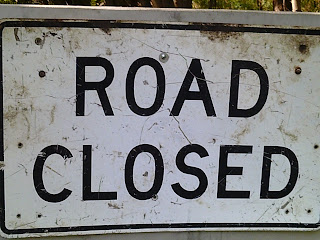 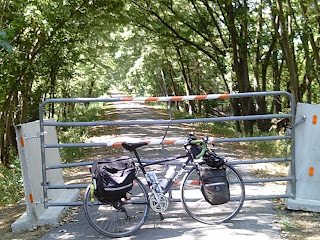 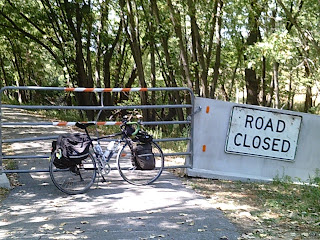 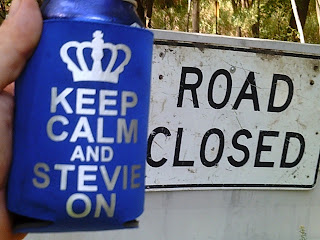 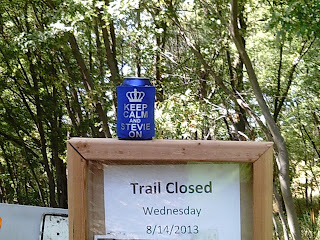 Another detour.  The plan was simple.  Mary ride north, I continue south.  We'd meet somewhere.  I wanted to get down the dam wall before she had to climb it.  But she zigged where she should have zagged.  That was at the Morning Star trailhead where the trail was closed due to the river taking a chunk of trail away.  I saw the roadblock on the other side, Sycamore Access and promptly took NW 66th to NW 6th and resumed the trail at Morning Star Dr.  Done this before when I failed to have a pump or new CO2 cartridge with me (free air at Casey's).  The mobile beeped from a text and than it rang.  Mary was at the Visitor Center!  She took NW 6th up to the Ankeny trail access instead of turning left on NW 66th.  traffic and better shoulder.  So I cracked open a Busch Light and waited in the shade.  Note that several bicycles went past the road block and did not return.  I assume that the river got them or that they made it to Sycamore Access.

From here it was an easy ride home.  Lots of leaves on the ground.  If it was not so hot I would have thought it was autumn.  We had lunch at the Mad Meatball.  Located next to Capital Pub & Dog and owned by the same folks.  $4 pints, I had the fat Tire seasonal, Pumptrick.  Menu consists of meatball subs, pizza and pasta.  We plan to return, goo0d food, good selection of draft beer and close to home--within cruiser range.  I hope they succeed.  Someday this area, MLK and SE 6th will be a thriving part of the East Village.

Well not as long as it should have been but a great ride nonetheless despite my gravel issue.  Accomplished several things: broke 5000 miles for the year, tested new equipment, tested new light set up and saw the trestle finally for 2013.  And most importantly, got to ride with Craig on a ride few mortals dare. 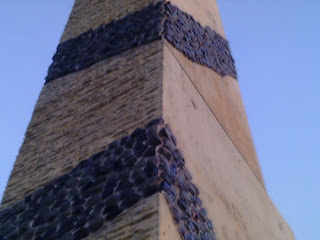