5 Seconds Late and I Could Be Free 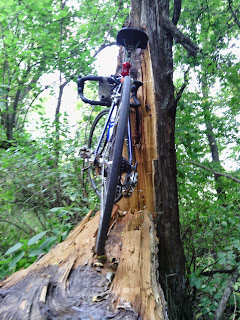 2 minute difference in departure time was all that it would have taken to end my life or end my 2013 riding year.  Looking at what happened 2 minutes before or after I stopped underneath the freeway makes me think that the former would have occurred.  And if I did not die how long would have I needed to wait for rescue?

The last full week of September, 2013, was a wet one for me.  Three times it rained on me, twice going to work, once on return.  My mobile phone ruined on Tuesday thanks to faulty Ziploc and faulty rain jacket.  Only a handful of times have I ever been caught in the rain on the way to work.  Maybe twice getting completely drenched.  Better to take the rain on the way home I still believe.  Shower up and wash the wet and dirty clothes.  I always study the radar and leave earlier or later if necessary.

Thursday the 19th was the worst.  Grey skies, dark clouds.  I watched the radar all day at work.  The cells were moving from the southwest to the northeast.  Looked like the metro's defector shield was working and the precipitation would miss us as usual.  After all, all summer long the rain veered north or south of the Des Moines Metro area.  I was not worried.  One co-worker said that it would miss.  She apologized the next day.  So instead of taking off early early I stayed and completed my work trusting what I saw on radar.  Leaving 40 minutes early would have made the difference. 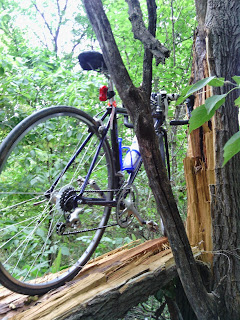 There was a pink cell on radar.  But the storm was still moving to the northeast.  I noticed that in the black clouds was a green area.  Always a bad sign but not heading my way as I headed down 128th toward the Clive Greenbelt.  Once on the trail I decided to stop and readjust my backpack sometime soon.  I was on the Trek 2200 and thus bagless.  Then a few sprinkles hit.  Nothing much I thought, perhaps blown this way from the ever increasing wind.  As the freeway approached I decided to stop underneath the overpass and adjust the backpack and assess the weather.  THEN SOMETHING HIT ME!  Fortunately I had sufficient speed and strength to ignore whatever that was and reach the safety of I-35/80 overpass.  Stopping in the center and turned back to look.  A small limb of a tree was now blocking the trail at the west entrance of the overpass.  That must have hit me.

Backpack off and readjusted time to look at the weather and roll on.  But that was not going to happen anytime soon.  It looked like a hurricane.  Strong wind bending trees and rain flying sideways.  All hell was breaking loose.  At some points I had to hide behind a pillar to avoid getting wet despite being in the center  of the overpass.  6 or 8 lanes above me as a roof and rain blowing in from the west.  The storm took a right turn.  Time to wait it out.  Watch the hurricane like storm from the safety of the freeway.  The view of the world outside the overpass looked akin to clothing in a dryer.  Swirling rain, trees, debris. 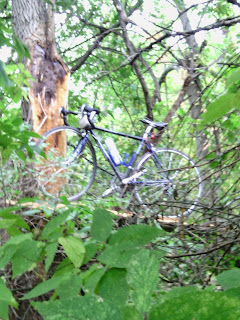 Quick organization of my supplies went through my head.  Dirty work attire in case it got cold.  No jacket.  No faux rain coat.  No mobile.  Plenty of cash in case I had to wait a long time and then got hungry after the storm.  Or a beer at University Pub.  Lights on the bicycle.  So I could stay warm and dry underneath the freeway for quite sometime until hunger or clear skies arrived.  I waited for what may have been 20 minutes.   When the rain and wind calmed down I heard the storm sirens.  Good timing.  Time to leave.

I was able to get to the first turn.  The trail was covered with leaves and twigs.  The 114th St bridge was narrow and would have made poor shelter.  Further on I had to stop immediately.  Down tree.  Hop off and climb over.  3 pedal strokes later another fallen tree.  Then another.  Perhaps 3 miles of  freshly felled trees and limbs.  I spent more time carrying the bike over them than riding the bike.  I appreciated the 2200's lightness.  If I would have brought the touring bike or a heavier bike my back would have been killing me. 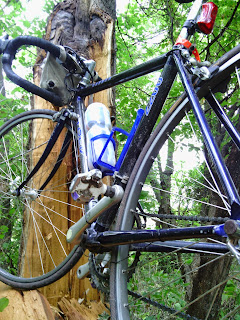 Then it occurred to me.  If I would have left 2 minutes earlier I would have made it past the safety of the freeway overpass and the small shelter of 114th bridge and been caught in the center of the crashing trees.  If I left 2 minutes later I would not have made it to I-35/80 and been caught in the storm west of the overpass.  Some of the runners at work informed me the next day that the trail was still a disaster and they had to run elsewhere.

Inching my way to Des Moines proper I encountered another cyclist going toward where I had come from.  This was near the park. 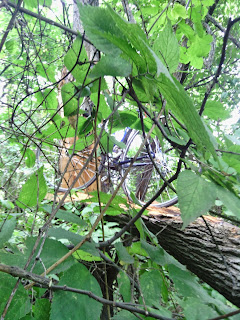 I thought about taking the road but decided against it.  Sirens were wailing everywhere beyond the confines of the greenbelt.  All the rain water would be heading toward the curbs and the area of the road I would be using.  If this many trees died on the trail I could not imagine what the storm left on the streets.  And the last thing any car driver needed to see and avoid was an idiot out in the street riding a bicycle during a storm.  No.  Safer here cyclocrossing trees.  We parted ways.  I told him the turn to Lincoln Ave was not that far away.

Not long later the rain picked up again and I stopped underneath 100th St. overpass.  Double wide with a split in the middle.  Sat on a rock and stared at the storm and listened to my world.  I wished I had my camera to video tape this I thought.  Kinda cool.  Deadly but cool at the same time.  I also worried about Mary who would be leaving Urbandale soon.  Maybe I stayed here for 10 minutes, leaving when the rain was reduced to acceptable levels.  I put my work shirt on since it was long sleeved and i needed the warmth layer knowing full well that it soon would be saturated with water and sand and dirt and tree shit. 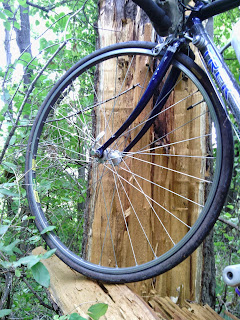 The farther east I rode and climbed over fallen trees and limbs the less of them I had to surmount.  I think the last one was near 86th St in Clive.  At last I could make time.  At least the trail was not flooded.

At Colby Park I had to get on school Street to take the ever hated detour.  A woman driving a late model Chrysler van rolled down her window and asked me directions.  I rode to the passenger side for safety.  She was asking me how to get to 6th and University.  This blew my mind.  She was miles off target.  Her mascara was running down her face and she tried to wake up her passenger, who until this point was out of my sight having reclined the chair all the way and was skillfully sleeping with an open container of hooch between his legs.  Then the smell of alcohol hit me.  Booze and the smell of booze that appears in the respiration of people who have been drinking for quite some time.

"You need to get onto University and head east."
"That road is all jacked up."
"All roads will be."

I left them.  Confident that she was scared sober and would probably be boxed in by other vehicles inching their way forward to their destinations, I left them.  I think I told her to take Grand then go up 6th St downtown.  Cops have their hands full and a drunk in a black minivan could probably make it to 6th and University be being careful.  That van looked fully insured and not paid off.

First trees now drunks.  I eventually made it home and showered.  Yes, exchange one form of water falling for another.  Good night to bake a pizza.  that would warm us up.  Jumped in the F250 and drove to Papa Murphy's and got two pies.  On the way back I saw a double rainbow.  God left a rainbow as a sign to Noah that he would never kill off humanity through a flood again.  Some Pacific Islanders interpret a rainbow as God's signal that they need to drink beer.  Yes, I need to pick up some beer.  It's been a rough afternoon. 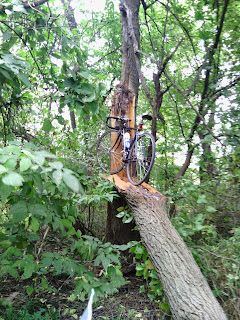 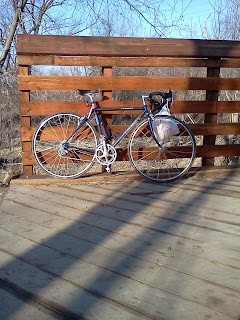 1.   Road bikes are the best commuters.

Lighter, faster.  Ever have to carry a bicycle over 3 miles of downed limbs and trees?  Thursday September 19, 2013, I found myself underneath the I-35 overpass while hurricane like winds and rain wreaked havoc on the metro.  After 20 minutes it calmed down but my next 3 miles were hell.  Sometimes I could not get 5 pedal strokes in before having to dismount and climb over a dead tree or limb.  Fortunately, I was on a relatively light road bike and not my heavy touring bike or any other 20 lb+ bicycle.  Faster is good too.  Faster bikes allow for later departure times thus more sleep or more time to screw around at home looking for some lost object for 20 minutes.

2.   I have uber immunities or Always check the water bottle before use

Been using the same bottle on the Trek for over a month.  Always fill it with ice and water before leaving work.  One time I filled it with Gatorade.  Today after dumping the contents out as I made my way to the ice and water machine I by chance glanced into the bottle.  Dark spots on the bottom.  How long had they been there?  Why have I not been ill?  I grabbed a Smart Water and put the empty moldy bottle on the spare cage resolved to clean it when I am home.

3.   When the "green" light stops appearing on the Niterider charger that battery is fubar

Yes.  A battery that is only good for 30 minutes at best.  Bad time a year for it to crap out.  Hope InterState Battery has an inexpensive replacement for about $25.

Not only did pumping the tire up prevent a pinch flat in waiting but improved my speed to work and back!  I really need to check it more often.

5.   I can increase my average speed even if I loop Gray's Lake

I have not looped this lake since March becaue it is overcrowded with pedestrians.  But today I weaved my way through it.  Cannot wait until December when the only people on that trail are professional runners and idiots like me.  BTW my average speed increased by .1 on that 1.9 mile stretch.  Only took the grass once!

That time of year again.  Do I wear extra clothes in the morning or do I tough it out?  52F is not that cold and people would be willing to chop off toes for a low of 52 F come January.  Best let the body adjust for winter because the mornings have not been cold yet.

7.   Never too late for construction in Iowa

Yes the land rapers and greedheads are at it again.  This summer has plagued bicyclists (and motorists too for that matter) with never ending road construction and detours.  Today they were ripping out trees on the Missing Link.  Guess that's why there are pink markers on that trail.  Bastards.  Leave well enough alone please!
Posted by CHE at 8:22 PM No comments: