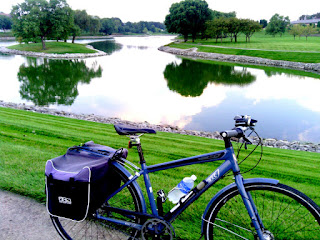 I am slow.  Mid range endurance.  All day riding ability.  Fast, no.  Except downhill thanks to gravity and my weight and confidence in my bicycles.  On my commuter I am slower.  Especially on climbs.  That bike was not built for hills.  Despite an aluminum frame it is a heavy bike.  Adding a rear rack and panniers did not help either weight nor aerodynamics.  The Nexus rear hub with internal 7 speed gears is so heavy that it has a gravitational pull.  So I had the rear cog swapped out from a 19T to a 21T.  Sacrifice top end for climb and cruise speed.  It took all summer to get that wheel back, long story, but this week I finally got to use it.  But I purchased that bike because it is weatherproof.  But as I said a long time ago, there is always someone faster and someone slower than you.  Today I was the fastest.


Normal commute to work.  I had the pleasure of riding with my wife Mary.  As usual we stop after 8 miles where our journeys part ways and kiss before heading to our places of employment.  I jumped off the bike and deployed the kickstand.  Had to disconnect her phone from my charger since someone forgot to plug their phone in over night.  Went from 70% to 95% in 8 miles.  I also used the opportunity to relieve my bladder before the hilly section of my commute was to begin.  It was at that time, mid-stream, that I saw another bike on the street.  Rarely do we see other bikes at 520 am.  This bike turned right and headed up Buffalo Rd.  I'll never see that person again I thought as I was in a compromised position away from my bike at a long way away from Buffalo Rd.
Finished what I was doing, put the battery charger away and kissed Mary good bye.  Time to climb.


Of course I had a red light but was able to trigger the light when I pressed the button.  It's flat at first until the tracks are crossed and then the hill begins.  Today I was climbing quite well.  New cog doing what it was supposed to do.  And when I reached Dowling I saw the red flasher.  It was 3/4 of the way up the hill.  Do I have a chance?  Go for it.


Competition.  Climb that hill.  Motivation.  I was gaining on the bike.  Glancing at my computer underneath a street light indicated that my speed was in double digits.  Good.  Keep it up.  The ascent levels a bit, more speed.  Then it steepens.  Still fine.  He now has reached the peak.  Keep going.  Wonder what gear i am in and make the mistake of downshifting one.  CRAP!  Put it back.  Damn, usually I have no gears left at this point.  reach the peak and twist the shifter all the way back.  Time to dive, curve and hit top speed.  make the final cure and get on the sidewalk.  Will need to press the light button..  I catch him!

He turns his head.  Buddy Holly glasses.  Melonhead commuter helmet and earphones.  personally, I hate those helmets.  No airflow.  Brain cookers.  Yellow and blue Trek MTB with front suspension.  Rack on back but no panniers.  A backpack instead.  Jesus, dude, why the extra work?  Nothing worse than wearing a backpack while biking uphill in 70% humidity,

So yeah, I found someone I can beat up a hill without him knowing that I was there.  Made me feel better about myself.  Think about it.  I gave him a head start when I was taking a piss.  Took more time sorting my bike out and saying goodbye to my wife.  If he only knew how slow I really am especially on the bike I was riding that day.

I paid for it on the nest hill.  I could feel my heart.  it said, "Happy now?"  Took a couple minutes to calm down.  I was all smiles.