The Spirit of Coffeeneuring 2016

Once again I have accepted Chasing Mailboxes challenge to ride my bicycle to 7 different places to drink coffee.  This blog post contains my tale of this endeavor.  To see a more detailed explanation of this please grab a cup of coffee and click this link https://chasingmailboxes.com/2016/09/17/6th-annual-coffeeneuring-challenge-the-spirit-of-coffeeneuring/ 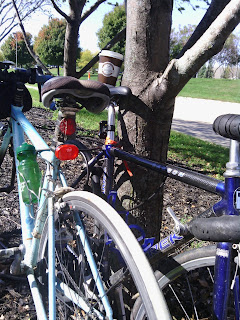 Scooters at Valleyfest, Valley Stadium, West Des Moines
Saturday October 8th
Medium Roast with a lot of half n half
25 mile round trip

Mary and rode to Valleyfest to watch our daughter participate in a HS marching band competition. Being the first weekend of the Coffeeneuring Challenge we planned to leave early enough to stop at a coffee shop for a cup o joe and breakfast but being ungodly slow we left too late for that.  The route was simple, ride 1/2 mile to the trail and take that all the way to N Valley Dr and take a left instead of  going straight like we do every Monday through Friday for our work commute.  Now it was day time and a weekend and the first obstacle was the 10 million people on the trail for the ALS walk which forced us to cut back and find a different access to the trail.  When we got to the turn we went straight half way through the intersection before we realized that we were making a mistake.  Guess we were lost in thought and conversation on how different the trail looks in daylight going this direction.  We corrected our course and got on the Levy Trail which led us to the Jordan Creek Trail that leads to Valley Stadium.  Thus a safe bicycle friendly route to this location even is not direct.  The only danger were from cars trying to get on the street from the parking lots.  They tended to pull all the way up and block the sidepath/trail.  Next time I may take the road for the last bit.

Once there we could not find a bicycle rack so we locked up against a tree.  After paying for our wristbands, $10 each, we walked through the gate and Scooter's Coffee had a table there selling coffee.  BINGO!!!  Choice between hazelnut and a medium roast so I chose the later.  They had half n half in quart containers which was a real bonus!  I was happy!!

I spilt me Americano on Mary's rack and panniers.  Should have used the lid.

Took empty streets and bike lanes to get here on a sleepy Sunday morning after church.  One thing I like about this place is that they serve sandwiches built and heated on a pannini press right before your very eyes.  Also they have art work for sale on the walls although not today.  Bonus: Grateful Dead on the sound system.  Breakfast and a coffee!

Made a grocery run to Windsor Heights and stopped in downtown Des Moines for coffee.  This place is actually about a mile and a half from my home.  Pretty easy and safe to get to via streets, trails and sidepaths.  The charm of WEASCo is that it sells antiques and such and refurbishes much of it for resale.  I am sitting in a ceremonial chair used by the Odd Fellows and for a mere $450 it could be mine.  Why they offer coffee and beer & wine I don't know but I like it. 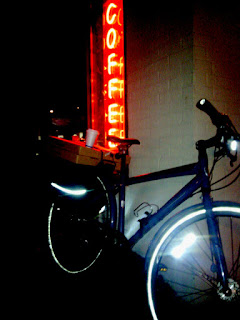 Met my wife on Ingersoll Ave to carry home pizza.  7 pm and now it is dark.  I got there early and had time to ride a few blocks further to Zanzibar's Coffee Adventure for an in house roasted coffee. My first visit there. The small was $1.95 which was great because I only had two pieces of cabbage on me.  Airpot, not the hottest but I did add my usual amount of cream to cut the bitterness and lower the temperature to a drinkable level.  I drank this outside in the now dark but wonderful autumn air. It was 58F outside according to a billboard.

The route?  Mix of trail and big city bike lane.  Ingersoll Ave is pretty busy but these is a bike lane and we we able to get back on the street after a bit of sidewalk action and crosswalk lights.  The last two miles are on sidepath/trail with a half mile of residential.  Personally, I find Ingersoll Ave a necessary evil that I can avoid for most of my life but occasionally I visit businesses here. 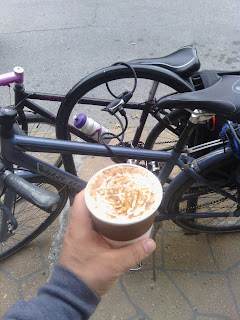 Wanted to go to The Hub which is on the Principal Riverwalk just a jet over a mile from home.  The route was a mix of residential and pedestrian bridge and streets.  1045ish on a Sunday morning, zero traffic downtown.  Despite checking their business hours online and reading the posted hours on their window, The Hub was not open.  This ruined a wonderful photo op of bicycles and coffee.  Also delayed my first ever purchase from said business.  Scooters was next on my list since it was a few blocks away and across from my bank.  Sunday mornings I need to check my account after abusive Thursday-Friday-Saturday spending sprees.  Originally went set out for hot chocolate since I had already drank a pot of coffee at home.  But I gave into the fanfare of the PSL since it actually felt seasonable outside and hot chocolate will always be around.  I declined the extra shot of espresso but Mary took a shot and turned her HC into a mocha.  Yeas, whipped cream, please.  Yes, cinnamon on top.  Do it right, do it up!

Friday after work.  Needed to get some beer for the weekend.  CABCo had a special, buy one get one, on their Fly the W Shandy despite the Cubs winning the World Series the day before.  So I took two 64oz growlers over for the fill.  Looked up at the board and saw Joe Schmo.  "What is it?"  An English Mild Ale brewed with coffee grounds from Java Joe's CoffeeHouse on 4th St.  Well, that sounds mighty good.  And it was smooth with a strong coffee taste.  Not bitter yet dark enough that I knew my wife would not like.  The ride there was the usual mix of quiet residential, pedestrian trail and streets.  Despite being around 5ish in the evening traffic was not bad and I felt very safe even when leaving with my loaded bike.


7.  Spirit and Science of Coffeeneuring

Just a causal ride in downtown Des Moines Iowa.  We had to leave the house because it was cold inside but pleasant outside.  We wanted to hit the Java Joe's in at the bus station but it was closed.  Then I had an idea.  Why not go to the Science Center?  They have to sell coffee at the Food Chain Cafe.  I was in the mood for a Starbuck's Frappiccino but  they had none.  Could have gotten a drip coffee but settled for a cold cappuccino by Illy.  Mary had the vanilla flavored.  We got to us the new stegosaurus bicycle rack as a bonus. 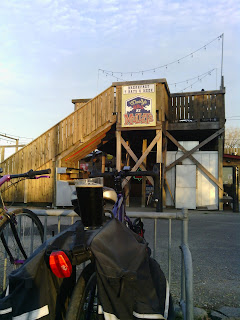 After completing my 7th and final trip I decided that I should take advantage of this wonderful weather and pleasant company and do one for Luis Garcia who is unable to complete his challenge due to a busted clavicle, scapula and 3 ribs received from a pothole related bicycle crash.

I was hoping that Surly's Bender was still on tap but it was not.  However, West-O's CoCo Stout was and it was $2 because of the NFL game special.  Cannot beat that for a craft beer.  West-O describes the brew best when they stated "Cream stout with lactose sugar…”thats why it’s a cream stout.” Cocoa nibs and bourbon vanilla beans make this beer creamy and chocolaty. Hints of coffee from 2 types of roasted malts. Candi sugar for a bit of marshmallow."

It was like a cold hot chocoale.  Very delicious!

Luis, heal quickly.  There are two types of bicyclists, those that have broken their collar bone and those that will.  I broke mine in 2010 going 30 mph.  I was luckier that you since that was the only bone I broke. 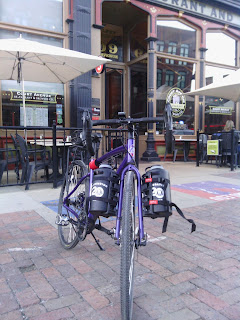 The scruffy looking dude was sitting at the end of the bar talking to the waitrix.  He had a mug which meant that he dropped 50 bucks down here last December or November or lied about it.  I was just trying to mind my M & G's (mug and growlers) and calculating if I had enough time for another mug before intercepting Wifey on the trail.  Time is always tight.  Then I overheard the conversation.

"Yeah, lots of layers in the morning then sweaty on the way home."

That was the give away.  Not a cager.  Possibly a motor biker.  So I asked him, "beesickle or motorbike?"

I moved a few stools closer to him so we could compare notes.  30 mile round trip commute just like mine.  Southsider just like me.  Busted clavicle now healed just like me.  Bagger bike until it was stolen.  Now road bike for commuter just like me 95% of the time.  Apt to take roads as convenience just like me.  More willing to skip trails out of expedience and fear of catastrophic failure sorta like me.  Looks for the best beer deal just like me.  A lot in common.

He heads north to John Deere in Ankeny.  Instead of playing it safe and taking the Neal Smith Trail he takes the roads.  "Yeah, you got this much room.  All sorts of gravel and debris."  I've been on those roads on weekends.  Shit but direct.  Yes the trail is a bit longer and safer but he says nobody is north bound when he rides.  Different when going home.

"The other day there was a big truck behind me.  I could hear it.  But a strap was loose on the trailer and after it passed me all sorts of roofing materials started falling off.  I had to take the ditch.  Plywood, shingles and other crap everywhere.  Then the car behind me almost hit me.  It did not see me.  They never do."  No doubt, blind as bats selfish cagers.

I queried, "why not the trail?"

"What if something happens to bike on the trail?  Bad flat tire, mechanical issue?  Catastrophic failure?  I'm hosed.  Difficult to get rescued."

True but pump, tube, tools, mobile phone and proper maintenance on the bike....  Then again why surrender to the Metal Overlords?  Open act of defiance on the pavement aimed directly at them.  I totally understand but pick my battles.  Maybe it is safer than I think.  Maybe his tolerance of those threats is greater than mine.

He's been doing this since March.  No real winter yet.  "Thinking about a fatbike for the winter." That would be great for the trails but a hybrid with studded tires would be faster and less expensive IMHO. Ice is the worst unless you ride on studs.

My mug had one large swallow left.  Mary should have made it Water Works Park by now, time to leave.  We clinked mugs one last time and I drained my dry.  Time to hit the streets and hope that the bastards will not run me over.  They are bad enough on each other and bicycles are often not on their radar until late.  Til we meet again, two wheels down.
Posted by CHE at 8:18 AM No comments: