And it feels just like yesterday I could ride in shorts and sandals on a road bike.  But yesterday it was something awful like 5F with a 20 mph NW wind.  I recall trying to unlock the bike and load the panniers and having to stop what I was doing to put my glove back on because my fingers were in extreme pain.  Yet somehow, dressed not unlike an astronaut, I was able to ride over 10 miles.  And today I made two trips outside when the temperature was below zero and thrive.  Not that I like this but it's something I have to do.

Yeah, I've been lucky.  Warmer than normal November but the hammer had to fall and the devil had to be paid.  Now I hope that the next 3 months fly be quickly.  I'm sure that Spring will take its time to warm us up.  It will get stuck in the 30s and forget to finish for a long time.

Until then I am ready.  I rebuilt the Winter Bike early.  Fresh cables and housing, fresh chain and studded tires aired up.  I even put a new saddle on.  And I have tested it in the worst of it.

Yesterday's rides were totally unnecessary but the ride unneeded are usually the best.  My daughter Katie stopped by after riding from her home to the Des Moines Area Community College.  She lives a tad bit over 3 miles away from us.  She rides a department store Schwinn built as a classic English 3 speed but with lower end Shimano 7 speed instead.  Regular road tires of the 700x32 variety.

"How was the trail?" I queried.  Friday the hammer began falling.  Freezing drizzle giving way to a light dusting of snow.  I managed to beat the snow home and had no issues except for my glasses icing up twice.  I expected the trail to be in bad shape.

Then I got drafted into riding home with her.  "Give me 10 minutes to dress."  It takes forever.  Base layer of socks followed by two pairs of winter socks.  Cold feet are the worst.  Some high tech long John thermals next and probably a pair of cotton thermals.  Black pair of khakis and finally a pair of sweat pants over that.  Excessive but warm and it works.  I doubt I'd sweat since the wind chill is supposed to be below zero.  Torso, Body Armor long sleeve and two fleece shirts plus windbreaker as outer shell.  Thick balaclava and thick head band to keep face and ears warm.  A stupid looking hat with fake fur lining for further head protection.  Herman Survivor boots that are insulated and waterproof and one size too large so I can get the triple layer of socks in without being too tight.  Finally a pair of Performance Gore Tex gloves to keep hands and fingers safe.  Cheap and effective.  I'm not racing, just trying to stay alive.


We took the Des Moines River Trail.  I think we had about an inch of snow at that point and more was falling.  Occasional clear spots were scattered exposing the ice on top of the trail.  The Red Phoenix, my winter bike had no issues.  Katie walked it one or twice on inclines.  We stopped at Fareway on SE 22nd.  I was in the mood for Moscow Mules and eggnog.  Katie needed something for dinner.  I also needed ice melt for the sidewalk.  So Eggnog, ice melt, vodka, limes and lime juice were my purchases plus her meal.  We parted ways here since she merely needed to go a block to her apartment.  Someone said that I was a brave soul.  I smiled thinking that she was the brave one.  219 car crashes occurred between 6 am Friday and 9 am Sunday.  I just look stupid or homeless.

On the way back I photographed the vodka on a trail bridge.  As I opened the pannier the limes fell out and off the bridge.  Stupid me.  After retrieving them and rolling home I counted 30 bald eagles in the trees that lined the Des Moines River.  They winter here.


Once home I asked Mary if she wanted to go out to Court Avenue Brew Pub.  She agreed and I swapped her road wheels for a set with studded tires from the now non-functioning Bianchi.  It's great to have bikes with compatible wheels.  I loaded two growlers and we rolled away.  The streets had not been plowed but we had no issues.  However, when we reached the pedestrian bridge that connects Mullets to downtown Des Moines we were greeted with the 20 mph headwind.  Keep head down to protect face and smile knowing that the tailwind home will be a reward for this misery.  In less than a mile we will turn out of it.  But it was hell.


So we drank a couple of mugs, filled the growlers, one with ginger beer for the Mules and the other with Honest lawyer IP since College Boy was home and we did not have any good beer in the fridge.  That's when I realized how bad it was.  Struggling to unlock the bike.  The cable was stiff and non-compliant in the negative temperature.  Struggling to unzip the bags to place the growlers in them.  Should have stayed home. No, conquer your environment!  Amazing how much better the gloves made my fingers feel.  When they say that frostbite hits in minutes best believe them.  We stopped at Blaze Pizza on the way home so we would not have to make dinner.  I unlocked the bikes faster this time.

It's a week before Christmas.  Usually the weather gets really cold on New Year's Day.  It's gonna be a long winter I fear.  Some good news is that a warm up will occur this week.  40s possible Thursday and Friday.  I'd relish in it.  I'm just glad that this cold snap happened on the weekend when I did not need to ride 27 to 30 miles to work and back.  Tomorrow morning may be bad but the high is slated for 27F.

"Winter came so soon like summer never happened.  We're players on a stage with roles already scripted.  Living for the day, working for a wage on a giant piece of dirt spinning in the universe."--Singularity

Sometimes Bernard Sumner can write lyrics.
Posted by CHE at 2:48 PM No comments:

Spotted on the trail under SW 9th viaduct.  At least 4 of these. 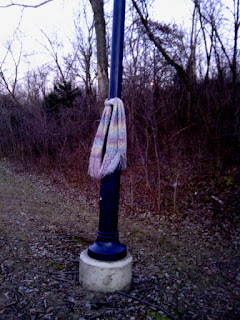 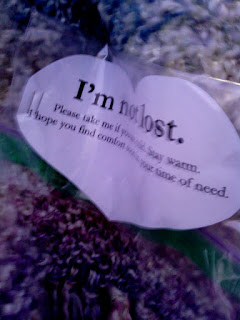 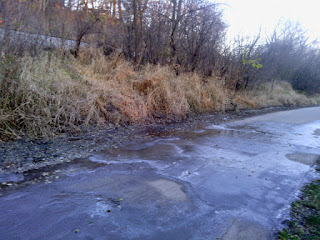 There is a spot on the Bill Riley Trail where the ice never ends.  Just north of the railroad trestle a source of water covers the trail.  When the temperature drops below freezing it turns to ice.  This ice grows all winter long.  It is dangerous.

It has not been around all summer or autumn.  But a week ago as the weather turned chilly it returned.  Now it is a large sheet of ice.  I have no doubt in my mind that it will be here all winter long.

It is like that at this time of year a pipe breaks.  Just be careful when using the trail. 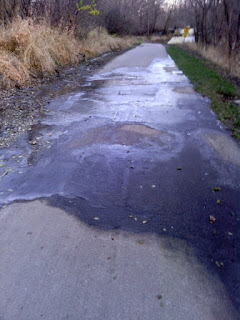 This is what it was last weekend before the freeze 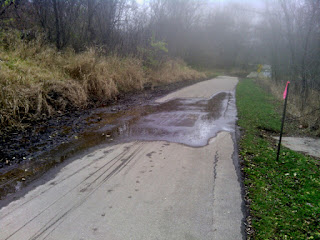 And this is the smaller section closer to the rail bridge. 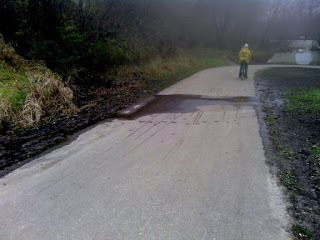