So here is what this is all about!  Coffeeneuring Challenge 2015 411 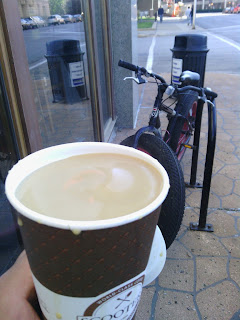 Scooters
10/03/2015
Large Americano
Woke up early to get my haircut.  Had to get there before he opened because he cannot cut hair and talk at the same time.  Took the Dolomite because it the short range weekend bike.  Left the Gomez barber and rode the fattie downtown to Scooters which is across the street from the courthouse.  Safe neighborhood streets, some bike trails and bike lanes.  Safe and friendly.  Bike rack located on south side of establishment.  Unfortunately tons of bird droppings on the tables near the rack.  The only issue is that is a Saturday morning and there are people from the farmers market and Run for the Cure invading downtown.  No real issues with them.
4 miles total 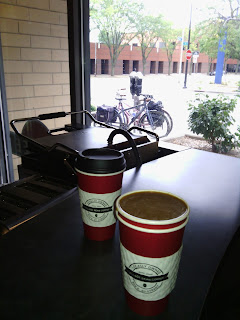 The Village Bean
10/04/2015
Medium Americano
Took some time to get out of the house this morning.  First breakfast then coffee.  Original motivation was for breakfast tacos at Mullets but the 25 minute wait was more than I was willing to accept.  We gambled that the Village Bean would be open on a Sunday morning..  It opens at 9 am.  Lucked out that breakfast sandwiches are available.  The barista/sammie maker/cashier/only dude working rides his bike everywhere.  Sold his car 6 years ago!  The ride was all streets and bike lanes.  Quiet Sunday morning with the exception of large trucks removing ruble and debris from the demolition of the YMCA earlier that morning.  Despite the trucks there were no issues.  Two bike racks on the corner but I moved our steeds directly in front of the window for the photo.  Mary had a hot chocolate (with lid).
3 miles total 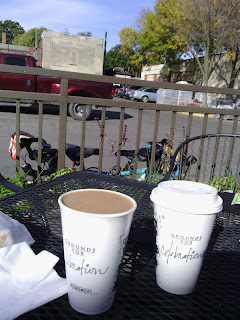 Grounds For Celebration
10/10/15
Medium Americano
Chilly morning ride at 49F with sunshine and promise of 70s or 80F later this weekend.  Took our "fast" bikes since this adventure would be a bit further than last weekend.  Because Farmers Market was still raging we opted to ride through the East Village to get to our destination.  Mary likes to avoid the FM crowd.  Despite the presence of and use of bike lanes traffic was a bit busy for a Saturday morning.  Probably people avoiding the farmers market or going there.  We caught the trail at the Botanical Center.  Noticed that work was in full swing on the Neal Smith Trail from the Women of Achievement Bridge to the Botanical Center.  This is good because that section of trail needed to be resurfaced for the last 20 years.  Once on the trail we were able to stay off the streets for the rest of the trip except for crossing intersections and the bike lane for the last mile.  Bicycle friendly it is although mary has been hit twice on the bike lane up Urbandale Ave, people backing out.  GFC is located in "Beaverdale."  We sat outside since our ride and mile + climb, gentle grade, warmed us up a bit.  I also wanted my coffee to cool down a bit to "drinkable" temperature.  Mary had a hot chocolate and we both had microwaved breakfast sandwiches.  On the patio we looked around and decided that there were places to visit to pick up a few items.  A hardware store (door knob) and Back Country Outfitters (headlamp and underwear) were within walking range so we left our steeds locked up to the patio.  We also stopped at Beaverdale Bikes for tubes, $6 per which is an outstanding price these days!  So not only bicycle friendly but useful area/ride.
15.5 miles total 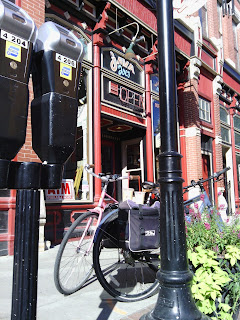 Java Joe's
10/11/15
Small Iced Coffee
Planned to get up and be there when they opened at 630 am because it was my turn to Lector at Church at 830 am.  Bed to warm and comfy even with Fritz in between us with the hiccups.  We hit JJ after Church.  Ride was bicycle friendly, 90% streets with one trail.  Even during weekdays it is not a bad ride.  Sunday means empty streets!  No Farmers Market.  Once we opened the door we got hit with a blast of WARM air and had to wait in line.  Lots of kids, too, they even have a kids playroom.  Because it was hot in there I ordered an iced coffee.  Took a big hit on it and filled the remainder with half and half.  Mary had some French vanilla iced coffee.  We consumed them outside because it was too hot inside.  After leaving we rode to Price Choppers to get charcoal.
10 miles total 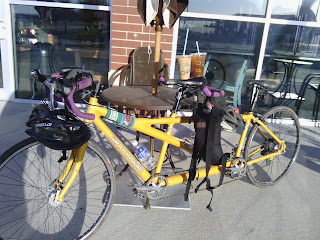 Caribou Coffee, Waukee, Iowa
10/17/15
Medium Iced Coffee
Big day!  Finally was able to put some serious miles in!  In a drought so to say.  The day focused on riding to Waukee, Iowa, to watch our daughter, Dora, compete in the State Marching Band Competition and later the Waukee Invitational.   The route was about as bicycle friendly as it can get.  1/2 mile from our house to the trail and then 16 more all on trail to the coffee shop.  The only bad part of the trail is what essentially is a sidepath that runs along Hickman Rd through Waukee.  Busy, busy 4 lane road with many intersections.  One must constantly check their 7 and 5 o'clocks when crossing the intersection to avoid being murdered by an expensive SUV.  But it is the safest and "friendliest" way to get to the Raccoon River Valley Trail.  The price of riding the bicycle to the trail.  Weaker folk simply drive to the trailhead.
61 miles total 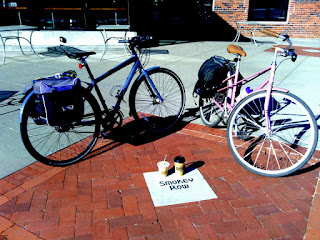 Smokey Row
10/18/15
Small Iced Coffee
Due to the Des Moines Marathon and several construction projects in town this was not a bicycle friendly ride but much better on bicycle than in a car.  Detours and construction sites and as such traffic was forced into places that would and should have been empty on a Sunday morning.  However, we did find a safer and fast route home with minimal traffic and detours and it was mostly downhill.
7 miles total 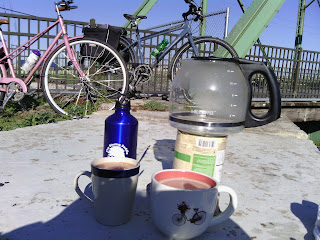 Coffee Shop Without Walls
10/25/15
Hot Chocolate
I was very intrigued with this one.  One problem.  I do not own a portable or camping stove.  A MSR Whisper Lite has been on my list for a while but other issues have taken that coin.  So I built my own.  I used a Sterno cannister, enchilada sauce can, 4 Barefoot Wine corks and an old Mr Coffee pot.  To expedite time I boiled water at home and ferried it over to the C w/o W.  I chose Swiss Miss since we had that home already.  The location is on the north shore of the Green Bridge (Jackson St Bridge) which is closed right now awaiting repairs.  This is a historic bridge that has been a popular pedestrian bridge for several years until it was deemed a "danger."  Very bicycle friendly route to this place.  A mere 1/2 mile of residential streets where people are expecting to see bicycles since a popular trail intersects it.  Then the other 1/2 mile is trail.
2 miles total 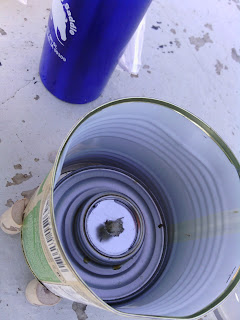