It was a perfect Saturday.  Best Saturday since April.  Not 100°F, humidity was not 200%, no rain or wind.  Cloudy. I love cloudy days since they reduce the deadly rays of the Sun. Seems it's been ungodly hot or rainy and windy every weekend since Easter. The Floodgates were finally shut off and we found a trail to ride on that was not flooded. The Chichaqua Valley Trail was our destination.  Love this trail.  Been riding on it since the 1990s before they paved it.  However, we have not been past Mingo, 11 miles from the original trailhead, in 2 years. Never enough time.  Today we had the time. 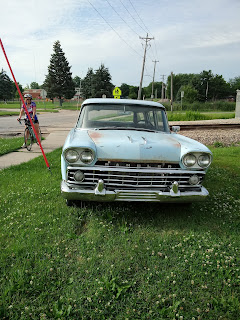 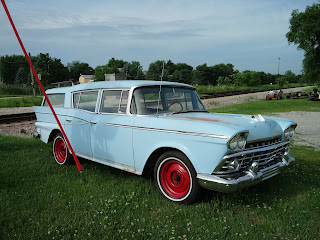 Ramble on!  This estate can be fiund in Altoona. This man has a few antique tractors and such.

We never take the trail system to get there. That's fine for people who live in Ankeny but for us in central Des Moines it is out of the way and flooded thanks to recent non-stop rain. We leave our home and connect up with the MLK bike lane and sidepath and head east to E 25th and turn north by Titan Tire and that road turns into Scott Ave. A mere mile and a half from the intersection of Scott and E 30th the Gay Lea Wilson Trail trailhead appears in Pleasant Hill.  During softball season it may be a bit congested when games let out but we had zero issues.

Remember to take the right fork on the trail at Copper Creek so that you ride into Altoona and not on the out of the way and flooded Four Mile Creek Trail.  GLW takes one all the way into Altoona and a new section eliminates a hill.  Eventually a county road is needed but traffic is zilch.  Follow the road all the way to Bondurant and the stop sign by the highway and head eadt to 88th St.  Take a left on 88 and the trailhead for the Chichaqua will appear on your right. Or you could head into Bondurant and enjoy wayward distractions. 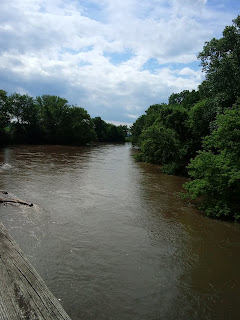 This trail is 20 miles long and paved. Mingo has a bar and a new water bottle filling station.  There are many scenic views. This is where the hills return to central Iowa.  Sometimed it reminds me of western Iowa.  Sometimes the blue sky and clouds look surreal.  Beautiful landscape!  Baxter, the end of the trail, has a store, bar, a Casey's and a place called Kountry Korner.  Excellent pizza there and tables. Perhaps my favorite convenience store ever.  We purchased two quarts of Gatorade and each ate a PowerBar that we carried. 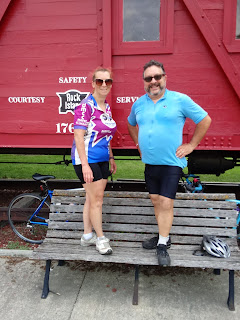 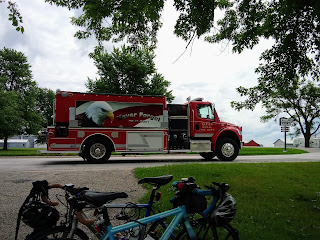 Small towns never forget. When their country asks they don't question. They give.


We were at 42 miles at that point.  Melbourne, Iowa was 10 miles away.  Why not?  Crank out 10 and rest at Clark's Bar then ride back 10 and eat pizza at Kountry Korner and recover on the trail all the way to Mingo. Plan. Mary agreed.

No sooner than we got on F17 then I realized that my headband was missing. Damn!  I always take it off when I stop to let it dry. It could be in Baxter or Mingo.  Hope to find it on the return.

A mile or so we turned left on S62 Jasper County. Smooth but no shoulder to ride on.  Traffic was light.  When the road suddenly appeared to have perpendicular tar stripes at tandem length intervals I realized we were now in Marshall County.  Smooth but looking weird this stretch of S62 was.  But we now had a foot wide shoulder to ride on.  Works for us!  We rode on this road before when we took the touring tandem to Cedar Falls back in 2012. I recalled 3 hills.  We'll be on this road again in a month when we do our alternative Ragbrai.  That will be on loaded touring rigs.  Today we are on light weight road bikes so hills are no big deal.  And we were cruising!

Clark's Bar was open.  Mix of locals and motorcycle types.  I asked for wifi, none, but did not ask for World Cup on the tv. Top Fuel drag races and Field of Dreams.  Beer was cheap. Got an Exile and a Summer Shandy for $7 even. Food is cheap too. Bar burgers for $3 and the most expensive pizza was $8.  But the conversation was most important today.

Two local tavern proprietors were discussing the hastle of Ragbrai.  Fees to pay if they use the street. Forced to close for an hour to get people to move along. Clark's will only serve beer.  Then what they said next pissed me off.

State Health Department said that the church could not sell pies that were baked at home.  No pies baked by parishioners unless they were baked at the church itself.  Now I understand that from a food safety standpoint and a lawsuit standpoint.  This church is forced to purchase pies from a factory out of town since they lack the equipment to bake the hundreds or thousands of pies needed to sate the Ragbrai riders.  If it rains they could be at a financial loss.

In my humble opinion such regulations destroy the spirit of Ragbrai.  So much for local flavor and culture.

Melbourne was the apogee of our ride. 50 miles from home excluding the 2 mile dead end we took earlier.  Next month we will get on the 330 Trail and take that into Marshalltown, our first overnight. Of course we will stop at Clark's Bar.  Speaking of which, bicyclists from Marshalltown ride to Clark's every Wednesday.  We look forward to meeting them.

The ride back to Baxter was faster despite the last hill. Definitely a downshifter.  Once back in Baxter I searched for my missing headband. Sweat in my eyes almost forced me to stop.  No joy.  Time for pizza.  We bought slices. Should have bought a whole pie.


Downhill to Mingo.  Barely noticed the gravel section that was repaved. People really bitched about this section east of Mingo. Now it is fixed.  More good news, I found my missing Tour de Kota headband where it fell off my bike at the park!

The rest of the ride was countdown of miles.  A strong desire to get home and shower.  And eat. Two PowerBars and two slices of pizza did not make up our energy needs.  We did have breakfast at home before we left but that was burned off long ago.  Chicken and Caribbean vegetables for dinner.  Easy to make.  Scarf down some fruit while I wait.  My thoughts....We reached the trailhead at mile 85.  The Century Mark was reached on the MLK sidepath at Kemin.  Home by 6 pm

Great ride!  We rode strong. Nothing broke. Unhurt.  Nice to be able to ride in decent weather.  This ride was perfect and about 20°F+ cooler than the long rides we have ridden since May. 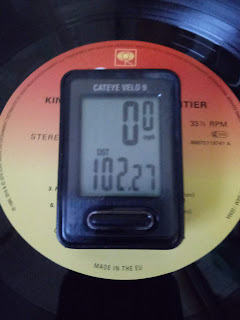