Just a beautiful day in our privileged world to use our bicycles as play things under the guise of helping others.  My main concern was that there would be shade where I would spend the next several hours running a check point for Cyclo de Mayo, Des Moines premier and original bicycle poker run.  At my side was my beautiful wife, Mary.  Although I'd much rather have spent the day riding 100 miles or something like that we enjoy participating in this event that raises money for the Joan S Gill Memorial fund.   I also look forward to seeing my bicycle friends. 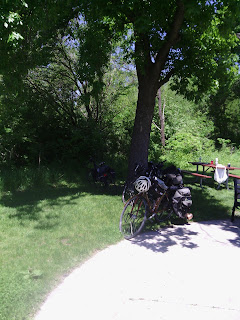 We stopped at B&B Grocery store to get a couple of sandwiches and water to fuel us up for the big event and then headed off to our station.  About this time my phone started receiving text.  I was expecting it to be from Graham Johnston, the BIC and creator of Cyclo de Mayo.  It was not.  Instead it was from Craig asking if he could join us at the checkpoint and bring a case of beer.  Damn, here we go again!  Of course, we could use the help and the beer.


After reaching Sam Cohen Park and claiming the picnic table we ate and waited for Craig and Kim.  There is an old functioning horse water fountain here that Graham repeated told me that the water was potable.  "My parents even chill their wine in the fountain when they are on bicycle rides," he said.  We brought our own but it was nice to know that water was available just in case I was within 2 miles of my home and suffering from terrible thirst or forgot to fill my bottles before leaving on a long trip.


The poker run went fast, unlike last year when half the field dropped out.  It was probably the busiest one I have done of the 6 I have worked.  Afterwards we relaxed and drank some beer before rolling off to the Triangle Tap for the awards ceremony. 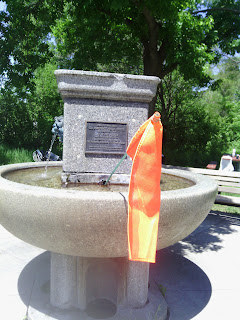 Two vehicles pulled up and parked in front of the fountain.  my first thought was that they were POed that we were having a bicycle even on their road and slowing down their driving.  Or that we were drinking beer in a park.  But  a bunch of people popped out of the back of the truck with empty plastic jugs and we knew what was up.  Water was disconnected at their home and they were on a water run.  Worse yet, as conversation revealed, they were living out of the truck.

There was a small boy, perhaps 4 or 5 years old, his parents and an older guy.  The older guy was big, not in an obese way, but as in tall and strong.  Long grey hair tied back in a pony tale and one of those horseshoe mustaches that I used to sport along with Hulk Hogan.  In fact, he was nearly the Hulkster's size.  He did most of the talking.  Craig got the conversation rolling.  Was staying at his mother's house but had to put her in a care facility.  Long history of violence and prison stretches. Adventurous careers including dumping bales of marijuana from airplanes and smuggling Mexicans across the border.  A few dead bodies from these excursions.  Self defense, kill be killed.  Violent reactions to pedophiles up to and including throwing one out a second story window only because the FBI asked him to leave the paedo alone.  He is of some native American tribe but said the Meskawski tribe want nothing to do with him.  No help from the courts or social services for finding a place to live or job.  His daughter inlaw has a job.  Not sure about his son.  Kim with her social services background ran a myriad of suggestions but he seemed to have tried them all.

All the time while they filled their water vessels he washed his hands over and over again as he told his life story.  Never once did he ask for anything.  Just needed the water.  Craig offered him some cash which he refused but then accepted.  Craig also gave him a bag of beers.

Mary and looked at each other when it was over.  We don't have much but we felt wealthy.  A stare into the abyss.  Needless to say this was on my mind as we rode toward the Triangle Tap.  And three minutes a group of drunken women on bicycles were giggling and telling us we missed our turn to Peace Tree I was not amused.  Nor was I when a some fat jerk on a road bike in full kit screamed "BIKE" at me instead the always polite "on your left."  I barked back and a rolling shouting match erupted on the NST below McHenry Park.  Just trying to enjoy the beauty of the world and determining if it was a bald eagle or a turkey vulture over the river when he yelled.  He probably called out "passing on the left" and I did not hear.  But to me he was another over privileged asshole. I haven't time to sympathize with all this nonsense.

There are things we can do.  Urban Bicycle Food Ministry is one of them.  This group if I am not mistaken meets every Thursday to give food to those in need.  A "humbling" experience I've been told.  Look them up on face Book.  Food banks are a good place to make donations.  Bidwell Riverside Center is located near the intersection of Hartford Ave and SE 14th.  DMARC is another place to make a donation.  Even just talking to such a person and treating them with dignity and respect goes a long way.  We all struggle to get through life, some more than others.