What's Up With the Green Bridge?? 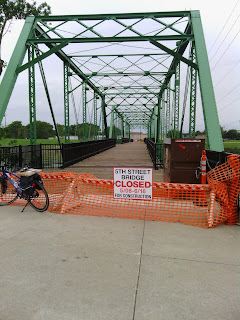 I'm reminded of that line from a Pink Floyd track that goes, "taught how to feel good but told to feel bad." Something like that.  So once again the green bridge aka as Jackson Street Bridge is MIA.  Mysterious construction work by Baker Electric.  Orange snow fence placed at both ends and signs stating that construction will be done on June 16th.  Once again the bridge is closed during the height of bicycling/pedestrian season.  The only thing anyone has noticed is that there is a large tool box with Baker Electric stamped on it.  No eye witnesses of actually construction.

My source, who will remain anonymous but think of a famous German ship and flying boat builder, the tells me that someone "gifted" the bridge LED lights.  Baker Electric is installing them. For liability reasons i.e. insurance i.e. $$ reasons the bridge has been closed to the public while the lights are being installed.

Why not do this in November?  Nobody cares about switching lights.  There is nothing wrong with the current lights.  People want to use the bridge.  People have broken through the barriers on both ends.  Unfortunately, my photo does not show this.

What really is frustrating is that The Powers that Be inspect the bridge and declare it good but then raise the standards and declare it unsafe, close it and restore it with our fundraising efforts and other avenues of $$ and open it right as the cycling season ends and now close it again because someone thinks it needs LED lights.  Yes, LEDs are better lights but nobody gives a fuck.  It better make the High Trestle pale in comparison.  I'll have a great laugh is some moron tries to steal these lights.

Rank over.  Thank you.